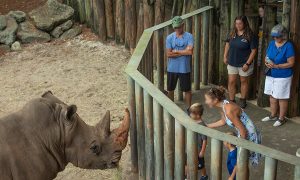 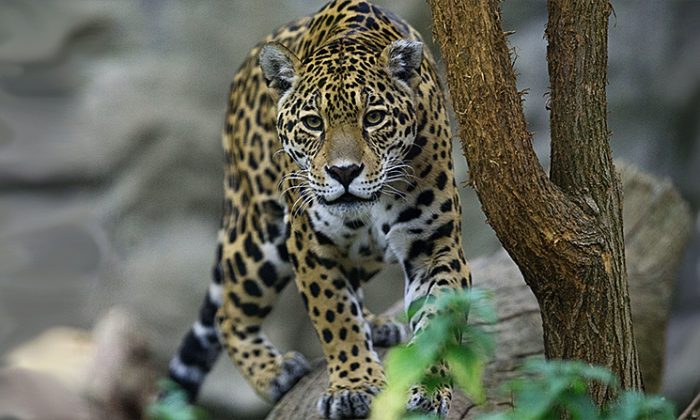 An American Jaguar strolls through its enclosure at Bratislava's Zoo, on Nov. 13, 2014. (Joe Klamar/AFP/Getty Images)
US News

A woman was mauled by a jaguar at an Arizona zoo on March 9 after crossing a barrier “to get a photo,” officials said.

Rural Metro Fire crews responded to “a report of a lady attacked by a jaguar” at about 6:40 p.m. at the Wildlife World Zoo, Aquarium and Safari Park near Phoenix, according to the Arizona Republic, citing spokesman Shawn Gilleland.

Gilleland said emergency responders transported the woman—who was not named in the report—to the hospital for treatment of lacerations to her arm.

The woman had injuries deemed not life-threatening.

A witness described the frightening encounter to Fox 10 reporters.

“I hear this young girl screaming ‘Help! Help! Help!,’ and without thinking, I just run over there,” Adam Wilkerson said, according to the report. “I see another girl with her up against the cage of the jaguar and the jaguar has clasped its claws outside of the cage around her hand and into her flesh.

WARNING: Graphic content, may be disturbing to some viewers

“My mom thinks of how to distract the jaguar and she grabs her water bottle and she shoves it through the cage, right near where the jaguar is,” Wilkerson said. “The jaguar lets go of the girl somewhat because the claw catches on just her sweater. At that moment, I grabbed the girl around the torso and pulled her away from the cage and it unlatches from her claw. The jaguar just goes after the bottle.”

No update was available about the condition of the victim, who is said to be in her 30s.

‘Prayers to the Family’

Zoo officials posted an announcement on Twitter, sending “prayers to the family tonight” and adding: “please understand why barriers are put in place.”

“We regret to inform that this evening, before closing there was an incident reported involving a guest, who crossed over the barrier to get a photo, according to eyewitnesses. The visitor sustained nonlife-threatening injuries to their hand from one of our female jaguars. At the request of the family, paramedics were called. At no time was the animal out of its enclosure. The incident is being fully investigated.”

Please understand why barriers are put in place. Sending prayers to the family tonight. pic.twitter.com/2MPb8bXhwR

The zoo is a USDA-licensed, private facility accredited by the Zoological Association of America and the Alliance of Marine Mammal Parks & Aquariums, according to its website.

The incident recalls the case of a jaguar that escaped its enclosure at a zoo in Louisiana and went on a rampage.

Valerio, a 3-year-old jaguar, managed to get out of its cage at Louisiana’s Audubon Zoo and kill nine animals.

The big cat chewed through the stainless-steel netting, which formed the roof of its enclosure, squeezed through the small hole, and got free to roam the zoo grounds.

Once free, Valerio followed jaguar instinct, killing as much food as possible while he had the chance.

The big cat’s escape was noticed at 7:20 a.m. on Saturday when a zoo staff member heard sounds of animals in distress. Valerio was busy in the fox pen at that time, having already attacked an alpaca and an emu.

The staff member radioed for help. Then he and the other staffer on duty sought shelter. The big cat could have easily killed both zookeepers had they tried to rescue the foxes.

Zoo security set up a safety perimeter and zoo veterinary staff tranquilized the animal. After making sure he was unconscious, zoo staff collected the big cat and transported him to his night enclosure, which is not open to the outside.

Zoo officials said that the mesh used as a cage roof met the standards set by the Association of Zoos and Aquariums.

“I’m still processing that the animal was able to bite through this woven stainless steel cable,” Kyle Burks, vice president and managing director of Audubon Zoo and Park, told Nola.com.

“I’m really proud of our team’s emergency response to this and our effort to make sure it doesn’t happen again,” Burks said.

There are no surveillance cameras in the jaguar enclosure, so staff have no way to know how long Valerio was loose.

“We know that he was out long enough to do the things that he did,” Burks said. “For us, anytime he was out was too long.”

An expert who heads a group dedicated to protecting and preserving wild cats said that Valerio’s killing spree was, in fact, normal jaguar behavior.

“It was completely natural behavior that is in no way reflective of a bad cat,” Dr. Aletris Neils, executive director of Conservation CATalyst, told Nola.com.

Neils said jaguars will kill as much food is available, because they can safely eat meat as much as a week old, unlike most big cats who can only eat fresh meat.

“When food is plentiful, you kill,” Neils explained.

Burks said that zoo patrons expressed sorrow for the slain animals—erecting impromptu shrines in the parking lot—and were also concerned about Valerio.

“There has been a lot of concern and question about Valerio, will he be euthanized over this event?” Burks said. “We are absolutely not intending to do that. He is also part of our family and he was, unfortunately, doing what jaguars do.”