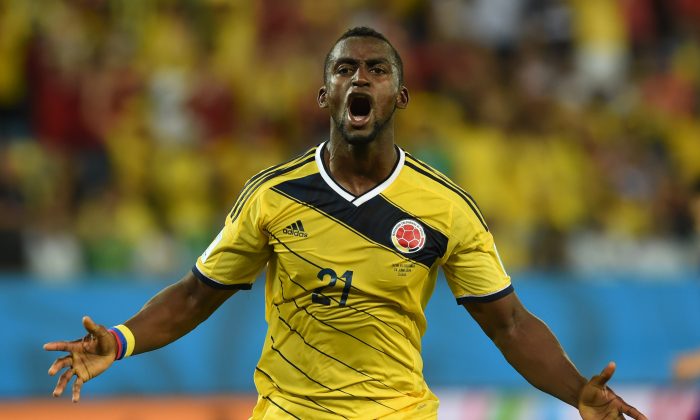 Colombia's forward Jackson Martinez celebrates after socring his second goal during the Group C football match between Japan and Colombia at the Pantanal Arena in Cuiaba during the 2014 FIFA World Cup on June 24, 2014. (TOSHIFUMI KITAMURA/AFP/Getty Images)
Soccer

Will Jackson Martinez play for Porto next season, or will he make a move to Arsenal?

The 27-year-old Colombia international had a good World Cup 2014, scoring two goals against Japan, and has caught the eye of a number of clubs.

Martinez also had an excellent 2013/2014 season, scoring 23 goals for Porto in 40 appearances for the Portuguese club in all competitions, according to WhoScored.

English clubs Liverpool, Manchester United, and Arsenal, as well as Italian clubs Roma and Inter Milan, are set to be interested in signing Martinez.

In particular, Arsenal and Liverpool are supposedly willing to pay his buy-out clause, which is worth £32 million ($54.6 million).

Arsenal and Liverpool’s interest in Martinez may be waning, however, as both clubs appear to be seeking out other striking options.

Gunner’s boss Arsene Wenger is looking to sign Italy and AC Milan star Mario Balotelli, but his inability to successfully broker a deal with Milan may get him to reconsider signing Martinez.

On Merseyside, manager Brendan Rodgers has the cash to spend after selling last season’s top scorer Luis Suarez to Barcelona, but he has already made a move for Queens’ Park Rangers’ Loic Remy and Southampton’s Rickie Lambert, and might not need another striker.

Regardless, Martinez is undecided about his future.

“I do not know what will happen,” Martinez told La FM.

“I have a contract for two more years with Porto and I know there is interest from several clubs.

“It’s normal if a player is playing well, but I have always respected my contracts.

“Only time will tell what will happen,” Martinez added.