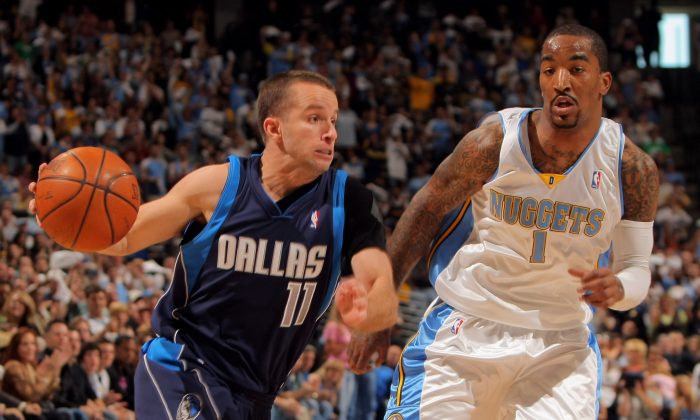 Jose Juan Barea #11 of the Dallas Mavericks controls the ball as J.R. Smith #1 of the Denver Nuggets defends in Game One of the Western Conference Semifinals during the 2009 NBA Playoffs at Pepsi Center on May 3, 2009 in Denver, Colorado. The Nuggets defeated the Mavericks 109-95. (Doug Pensinger/Getty Images)
NBA

J.J. Barea Returns to the Mavericks

On Wednesday the Mavs waived second-year guard Gal Mekel. This left an open spot on the roster for J.J. Barea to be brought back. As an 8-year veteran, Barea will be paid a minimum salary of $1.31 million. He had been waived Monday by the Minnesota Timberwolves where he had played the last three seasons. Barea had reported to the Mavericks, but wasn’t expected to play Thursday in their games against the Utah Jazz. But he came into the game with 1:33 left in the first quarter. Played a total of 18:38 minutes, scoring 4 points and grabbed 4 rebounds. The Mavericks would go on to win the game 120-102, once leading early in the game by 30 points.

Barea was asked after the game how he felt returning to the Mavericks. “It is good to be back home,” he responded. “I like the fans, center, the team and coaching staff.” He went on to say that he would play wherever Coach Rick Carlisle chose to place him. Coming off the bench or starting, he didn’t mind.

In his post-game news conference Carlisle was asked what he was going to do with Barea. “I am not sure yet. We have a lot of talent especially at the guard positon. We will just have to see how we match up against other teams, and then decide,” he said.

Barea is a great shooting guard. He can shoot deep, or penetrate the lane seemingly at will. Then take a shot or dish quickly to the open man if he is covered. While on the court he increases the playing tempo, getting teammates to respond more willingly than before his appearance. His good defensive play especially in zone coverage enhances the team’s offensive ability.

Barea spent his first five years of his professional career playing for the Mavericks and was a member of the Mavericks NBA Championship team. During the 315 games he played for the Mavericks, he averaged 7.1 points and 2.9 assist per game. In each of the five seasons in the NBA playoffs, his accruing averages of 7.7 points and 3.0 points in 40 postseason games (7) starts.

The Mayaguez, Puerto Rico native will wear number 5 for the Mavericks.