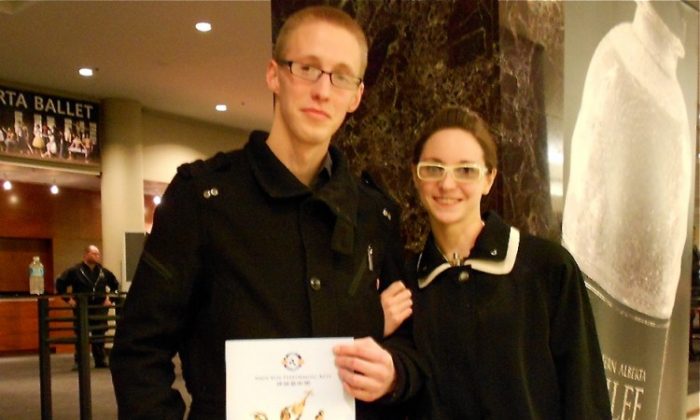 “It was just a wonderful performance, and time didn’t really feel like it even existed,” said Ms. Stephens.

“It was fantastically done.”

“I’ve never seen anything like that before,” added her husband Mr. Makowsi. “I thought it was amazing.”

Through a broad range of story-based dances, the company takes audiences on a tour of 5,000 years of traditional Chinese culture.

Mr. Makowski, a guitar technician and drummer for local band Silentpanic, was highly impressed with all aspects of the musicianship displayed in Shen Yun.

“The orchestral performance was amazing. It was spot-on, very well put together. I’ve got to give [credit] to the conductor for that as well,” he said.

He appreciated the East-meets-West blending of traditional Chinese instruments into the full philharmonic orchestra.

“It’s like two completely different sides of the world of instrumentation has come together, and that was phenomenal,” he said.

“I can imagine how hard it would be to mix the two together, but the orchestra did an excellent job.”

He was also impressed with the synchronicity between the orchestra and the dancers, saying the music captured the “mood” of each dance perfectly.

“When the dancers are performing … the music is rising and falling and they can definitely paint a picture for you,” he said.

“I can only think of it like how many months of hard work it must have taken to put that whole thing together.”

Ms. Stephens adored the many and varied costumes in the show, describing the colours as “enticing.”

“I liked the vibrant colours, and the flowing of the dancing is great,” she said.

“It’s playful, with the colours and the movements. It makes you really open your eyes to the culture.”

Ms. Stephens was also touched by the spirituality in Shen Yun, which she says beautifully expressed the values of the traditional culture.

“I think what I really got from the show was in almost any culture there’s always a divine, a holy spirit, and it seems in Chinese culture specifically that’s their main goal is reaching the nirvana,” she said.

“They’re fairytales that can keep the spirit going, to try and build towards actually [becoming] the divine spirit and the divine light.”

According to the Shen Yun website, traditional Chinese culture is rooted in China’s three main ideological pillars of Buddhism, Daoism, and Confucianism.