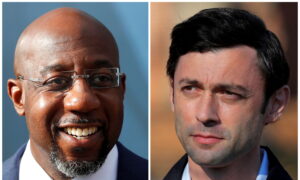 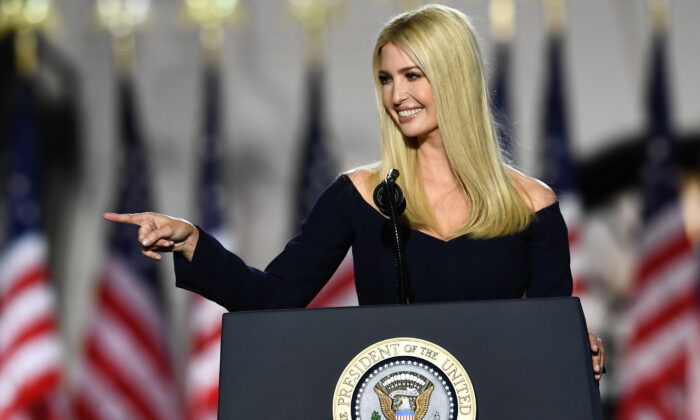 Ivanka Trump, daughter and Advisor to the US president, speaks during the final day of the Republican National Convention from the South Lawn of the White House in Washington, on Aug. 27, 2020. (Brendan Smialowski/AFP via Getty Images)
Georgia

Ivanka Trump to Campaign With Sens. Loeffler and Perdue in Georgia

White House adviser Ivanka Trump is set to campaign on behalf of Sens. Kelly Loeffler (R-Ga.) and David Perdue (R-Ga.) in Georgia on Monday, the same day that Sen. Kamala Harris (D-Calif.) is scheduled to pitch Democrat contenders for Senate seats as the crucial runoffs approach.

The president’s daughter will make stops in Milton, Suwanee, and Walton County, according to the Georgia GOP.

“She will highlight the historic accomplishments of the Trump Administration with the help of the Republican Senate Majority, along with the importance of voting in the Georgia runoff elections,” the Georgia Republican Party said in an emailed statement.

Harris will make stops in Columbus and Suwanee, according to Atlanta radio station 95.5WSB.

The January twin runoffs, which pit Perdue and Loeffler against Democratic candidates Jon Ossoff and Raphael Warnock, are key for both parties, with control of the upper chamber hanging in the balance. Republicans currently hold 50 seats in the Senate, meaning Democrats need to win both races in Georgia and also prevail in the contested presidential election to gain control of the White House and both chambers of Congress.

An Insider Advantage poll shows both GOP candidates one percentage point ahead of the Democrats, with a 4.4 percent margin of error. Matt Towery, the founder of the polling company, told Fox5 that “it is a statistical dead heat in Georgia.”

“There is no room to spare here,” Towery told the outlet. “It’s just a matter of who hits the accelerator and gets their people out to the polls because, as far as the numbers, this is a dead-even race.”

Early in-person and absentee voting has already begun in Georgia, with more than 900,000 people having already cast their votes in the twin runoffs, with around half of that by mail, according to the latest data from the state.

Vice President Mike Pence held rallies in Columbus and Macon on Thursday, campaigning on behalf of Loeffler and Perdue, urging voters “to send these two great senators back to Washington, D.C.”

Pence spoke of the need for the GOP to hold the Senate in order to keep a rollback of Trump’s policies at bay.

“We need to send them back because a Republican majority could be the last line of defense to preserve all we’ve done to defend this nation, revive our economy, and preserve the God-given liberties we hold dear,” Pence said.

A win by either Loeffler or Perdue would keep the Senate in Republican hands, while Democrats need to win both seats and have Harris as Vice President to effectively flip the upper chamber.

Sen. Bernie Sanders, who is planning a virtual rally to drum up support for Ossoff and Warnock, said in a tweet Friday that a Democrat victory “will go a long way in transforming this country.”