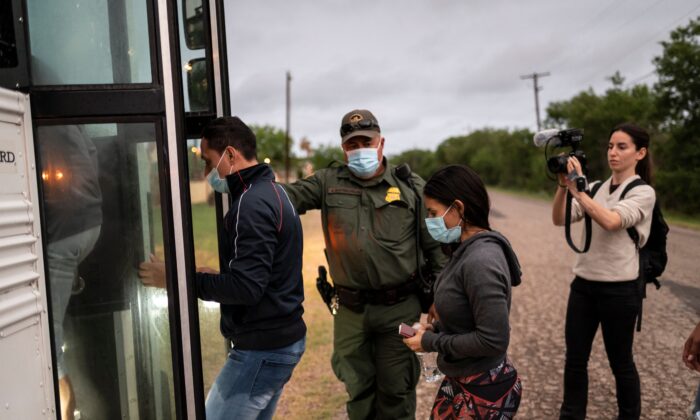 Illegal migrants board a bus after being apprehended near the border between Mexico and the United States in Del Rio, Texas, on May 16, 2021. (Sergio Flores/AFP via Getty Images)
Viewpoints

As the world focuses on the Russian invasion of Ukraine, we must not forget that the Biden administration is working every day to undermine our own borders—both national and state.

The immigration crisis, which President Joe Biden has created and sustained at the U.S.–Mexico border, is a complete tragedy of human life, national security, and basic morality. Biden’s open border is fueling the illegal drug trade, human trafficking, and other harmful smuggling operations. It’s providing an easy target for criminals and foreign agents who want to harm Americans. And it’s eroding the legitimacy of our already struggling legal immigration system.

Despite all indications that the problems at the border will get worse—and only more dangerous for immigrants and Americans alike—the Biden administration has actively ignored the border crisis and allowed it to metastasize.

Rather than fixing the problems created by the Biden open border policy, the administration is simply trying to spread out the pain, so that it seems less serious. Since at least December 2021, the Biden administration has been secretly relocating people who crossed the border illegally—including unaccompanied children—to U.S. cities and towns through so-called “ghost flights.”

The administration has been filling flights (and in some cases buses) with people who have crossed the border illegally, allowing them to be spirited away to communities away from the border. We know these relocations have happened in California, Florida, Kentucky, New York, Pennsylvania, Tennessee, Texas, and Virginia. There’s little reason to think the list isn’t much longer. We don’t know exactly who these people are—or precisely where they’ve been taken—because the administration isn’t releasing manifests or giving state or local officials any notice. However, we do know that the people being transported aren’t being checked by law enforcement or public health officials for criminal records or COVID-19, respectively.

Thankfully, I met with a group of lawmakers last week who are working to impose transparency on the Biden administration.

Rep. Dan Meuser (R-Pa.), along with 56 other members of Congress, has sponsored the Immigration Transparency and Transit Notification Act. The law would force the Department of Homeland Security and the Department of Health and Human Services to notify federal, state, and local officials about these relocations—both before they happen and in quarterly reports to Congress. This would allow governors to know who’s coming into their states and to provide an extra layer of protection for the unaccompanied children who are being taken to new, unfamiliar places.

First, this is exactly the sort of popular, rational, commonsense legislation that Republicans should be developing while they prepare to retake the majority in January (barring some extraordinary event, this is almost a certainty in the House and a serious likelihood in the Senate).

But at the most basic level—beyond partisanship or legislative goals—Americans have the right to know who their government is bringing into their hometowns and communities. The Biden administration has been airdropping people—who have already broken the law by attempting to sneak into the country—into cities and towns across the United States without checking their criminal histories or screening them for COVID-19.

That the administration has been doing this in the dead of night without telling anyone tells you everything you need to know. They know they’re doing something Americans don’t want—so they’re sneaking around.

Meuser—along with Reps. Brian Babin (R-Texas), Elise Stefanik (R-N.Y.), and the more than 50 other co-sponsors of the Immigration Transparency and Transit Notification Act—are doing exactly the right thing in holding this administration accountable and forcing it to be honest about these ghost flights.

I hope every American who opposes this dishonest, sneaky Biden relocation program contacts his or her Congress member and senators and urges them to support this legislation—and approve it when potential Speaker Kevin McCarthy (R-Calif.) likely assumes the role in January 2023.