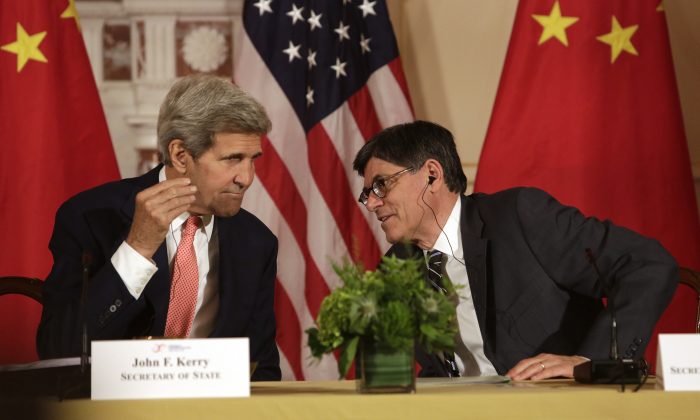 US Secretary of State John F. Kerry (L) confers with US Treasury Secretary Jacob Lew (R) during the closing session of the seventh US-China Strategic and Economic Dialogue (S&ED) at the US State Department in Washington DC, June 24, 2015. (Chris Kleponis/AFP/Getty Images)
Business

Despite a little 5 percent hiccup in the Chinese stock market—most likely engineered—it is now becoming ever more official that the Chinese regime has lost control.

According to reports by Bloomberg, insiders have confirmed that China is heavily selling U.S. Treasurys on the market in order to contain the yuan devaluation that started two weeks ago. Because the volume is so large, Chinese representatives are speaking to their U.S. counterparts to avoid market turmoil—with limited success.

Société Générale estimates the amount sold in the last two weeks to be higher than $100 billion, and if this rate continues, we could see sales of over $500 billion for the year easily, much higher than a previous estimate of $304 billion. This could have a substantial impact on Treasury yields and therefore U.S. financial markets.

As Epoch Times previously reported, this exercise is both necessary and counterproductive at the same time. On the one hand, Chinese companies as well as banks, Chinese citizens, and international speculators are moving money out of China (buying mostly dollars). On the other hand, fewer dollars are flowing in because of lower exports, so nobody wants to exchange dollars for yuan.

So the People’s Bank of China has to step in and make up for some of the shortfall by selling its liquid foreign exchange holdings (Treasurys) and supplying the balance on the yuan–dollar market.

This helps because it prevents the yuan from crashing the 10 to 20 percent it has to to reach economic equilibrium. The currency has to remain relatively stable to have a chance to be included in the International Monetary Fund’s world reserve currency.

From an international perspective, the severe dollar crunch in China and elsewhere proves everybody wrong who thought China could have a financial crisis and the rest of the world would not be affected. That may have been the case when the Fed was supplying trillions of dollars of liquidity via its QE program and buying up Treasury bonds in the process.

QE has stopped for almost one year now, and the dollar markets as well as the Treasury markets are feeling the pinch. Yields have not come down during the latest stock market rout, which they usually do precisely because China was selling large quantities of Treasury bonds—and it could get much worse.

If China keeps on selling at the current run rate, Citigroup estimates it could artificially raise Treasury yields for the 10-year bond by more than 1 percent—that’s a lot for a Western financial system that maybe has gotten a little too used to low rates from the central bank.