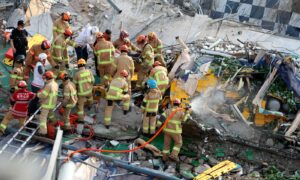 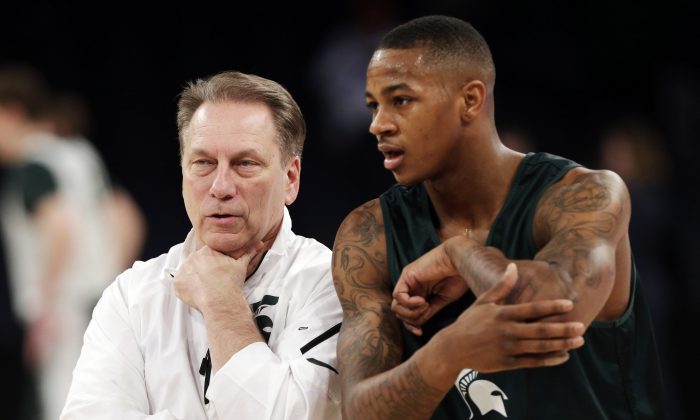 By Matt Charboneau
From The Detroit News

However, the Hall of Fame coach would have been hard-pressed to ever believe his former captain was capable of committing murder.

“I didn’t see him ever (being able to) do something like that,” Izzo said on Wednesday.

On Monday, Appling was charged with first-degree murder in connection with a May 22 shooting in Detroit, Wayne County Prosecutor Kym Worthy announced. The 29-year-old Appling is charged in the fatal shooting of Clyde Edmonds, 66, on the front lawn of Edwards’ home. His wife is the first cousin of Appling’s mother, according to the Prosecutor’s Office.

Other chargers included felon in possession of a firearm and felony firearm.

“Sad,” Izzo said. “I’m thinking about him. I feel bad about him. It’s a shame what’s happened.”

But really, that’s been the feeling for some time with Appling, who has been in and out of trouble with the law often since his career with the Spartans ended in the spring of 2014. Two years after his final game—a loss to Connecticut in the regional finals of the NCAA Tournament—Appling had his first brush with the law when he was stopped in Detroit with a gun in his car and multiple drug offenses followed.

All along the way—up until just weeks before the incident in which Appling has been charged—Izzo was doing what he could to help Appling.

From the time Appling returned from his first season in the NBA, Izzo has been doing his best to help steer Appling in the right direction. It was after Appling played five games with the Orlando Magic in 2016—following two seasons in the G-League—that Izzo and others pushed Appling to stay in Orlando or at least spend the offseason working out away from home.

Instead, Appling returned and was arrested for the first time. He served a year in jail, and when Michigan State was playing a game in Detroit in December of 2017, Izzo visited Appling in prison. Not long after Appling was released, he began to resurrect his career, playing in Mexico, Argentina, Italy and the Dominican Republic from 2018-19.

Back home in Michigan after he was done playing, Appling, who was serving a term of five years’ probation from the 2016 arrest, was still having a hard time. Izzo was attempting to help, seeing if he could find a way to land Appling a steady job, but it wasn’t going well.

In October of 2020, Appling pleaded guilty in a drug-related case out of Macomb County and was given 18 months of probation. That case violated Appling’s earlier probation terms, spurring a bench warrant in Macomb County on Feb. 16 and a separate warrant issued by Wayne County Circuit Judge Lawrence Talon on May 6.

A little more than two weeks later, Appling allegedly shot Edmonds and ran, leading police on a manhunt that ended two days later when he was apprehended in Chelsea.

“It has been clear that this man has been spiraling downward for some time,” Worthy said. “Many of those that tried to intervene with this defendant were hoping that he would get on the right track and stay there.”

Izzo was one of those people trying to help, as was former Michigan State teammate Russell Byrd.

Byrd trains players in the Lansing area, and Izzo said Appling helped with the training when he could and made a little bit of money. But it wasn’t enough to sustain Appling or keep him on the right path.

Now, the former high school All-American who led Detroit Pershing to the state championship in 2009 by scoring 49 points in the title game and was named Michigan’s Mr. Basketball as a senior in 2010, could end up spending the rest of his life in prison.

“I did get to spend a little time with him,” Izzo said of the help he offered over the past years. “I would like to say I hope and pray to God that it is not true. But I have no knowledge of anything except I was trying to help him get back on track, as were more than a few people.”