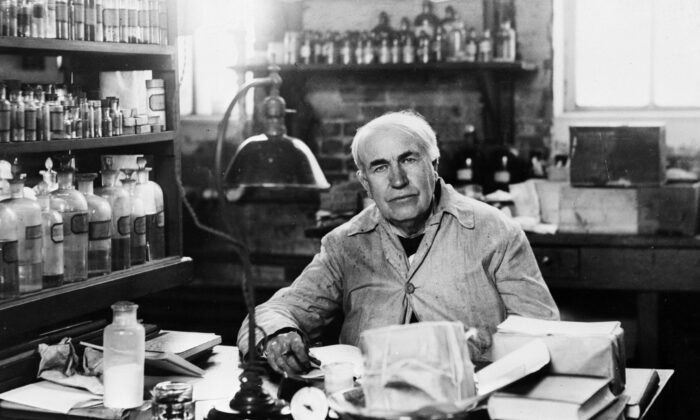 Thomas Edison was famous for not letting failure deter him. (Keystone/Getty Images)
By Jeff Minick

Jeff Minick
Jeff Minick lives and writes in Front Royal, Virginia. He is the author of two novels, “Amanda Bell” and “Dust on Their Wings,” and two works of nonfiction, “Learning as I Go” and “Movies Make the Man.”
View profile
biggersmaller
Print

I was in the public library browsing Sam Weinman’s “Win at Losing: How Our Biggest Setbacks Can Lead to Our Biggest Gains,” when one chapter stopped my fingers dead in their tracks. I found a chair, read for a few minutes, and remembered Susan Lucci.

From 1970 to 2011, Lucci played Erica Kane on the soap opera “All My Children.” While I never watched this show, Susan Lucci was a household name, not because of her role on television but because for 18 years, she received an Emmy nomination for the “Outstanding Lead Actress in a Drama Series” and for 18 years, she walked away from the ceremony without a trophy. Her losing streak became a measuring stick of failure, a national metaphor applied to other losers. As Weinman writes, the Chicago Cubs were the “Susan Lucci of baseball,” the Buffalo Bills “the Susan Lucci of football,” and Martin Scorsese “the Susan Lucci of the Oscars.”

And then, in year 19, Lucci won that coveted Emmy.

In this brief chapter, Weinman introduces us to a woman who, though bitterly disappointed by failure, never gave up and rarely let others witness her sorrow. Year after year, she returned home from the Emmys, closed her bedroom door to hide her tears from her children, wept, and then returned to work the next day, determined to perform to the best of her ability.

According to Weinman, Lucci’s example deeply influenced her children, especially her son Andreas, who “maintains that his mother’s experience proved instructive in how to handle setbacks, even if it wasn’t something she sought to teach explicitly.”

Which brings me to today’s young people.

Most of us have children, grandchildren, nieces and nephews, and other young people in our orbit who undergo disappointments. John, who spent hours training over the summer, gets cut from the football team. Julie spends her soccer season warming the bench. Second-grader Amanda comes home from school sobbing because she got demerits for talking too much in class. Ten-year-old Becky isn’t invited to a birthday party attended by her friends. Her older brother Doug earns unacceptable grades of C in math quizzes. Samantha has spent years hoping to attend State, but is refused admission.

When these troubles occur, most of us want to rush to the defense of our children. We tell John and Julie their coaches are blockheads. We meet with Amanda’s teacher to complain about her punishment, and we telephone the birthday party mom to ask why Becky was left off the invitation list. We console Doug and Samantha, telling them they are just as good as anyone else.

This desire to protect our children is a natural instinct.

But is it good for them in the long run?

Google “Are students socially and emotionally prepared for college?” and up pops a chorus of negative replies. When failure comes knocking at the door, as it does for so many freshmen, these stressed and anxious students don’t know how to handle the consequences. They’re strangers to that awful sensation known as “falling on your face.”

They’re missing a key ingredient for success in school and in life: resiliency.

Resiliency comes to us from the Latin “resilire,” meaning to “rebound” or “leap back.” Students heading off to university who have never studied in that other classroom—“the school of hard knocks”—are missing a tool more vital to success than an AP Chemistry course or a straight-A average. Even a minor setback can beat them to their knees.

Part of their lack of resiliency is our responsibility. Those of us who deal with the misfortunes of our young people walk a rough road. When something goes wrong, our protective instinct kicks in, and we want to ward off the blows life throws at them.

This mama bear/cub approach can have long-term consequences. Once, for example, a grown man, now deceased, told me his parents always took his side against the teacher, no matter what the circumstances. He was proud of their defense.

No—if we wish to build resiliency in our young people, we must sometimes resist this urge to remove all obstacles from their path, to become what some now call “lawnmower parents.” We can offer help, but must then step away and allow them to grapple on their own with the trouble at hand. This wrestling match with hardship, with expectations and plans gone awry, can build in them a sense of independence, a realization that failure is not an enemy so long as we learn from the experience.

In “The Obstacle Is the Way: The Timeless Art of Turning Trials Into Triumphs,” Ryan Holiday writes that “obstacles are actually opportunities to test ourselves, to try new things, and, ultimately, to triumph.” We overcome these obstacles using many tools, particularly resilience and perseverance, which, as Holiday tells us, the Germans call “sitzfleisch”—staying power.

Holiday recounts dozens of examples of human beings who possessed sitzfleisch, figures ranging from Amelia Earhart to Erwin Rommel, from Abraham Lincoln to the boxer Jack Johnson. My favorite of Holiday’s examples was an anecdote about Thomas Edison, who one evening raced from his home to his research and production plant when he learned it had caught fire. Fueled by chemicals in the various buildings, the flames were soon shooting up seven and eight stories high.

“Edison calmly but quickly made his way to the fire, through the now hundreds of onlookers and devastated employees, looking for his son. ‘Go get your mother and all her friends,’ he told his son with childlike excitement. ‘They’ll never see a fire like this again.’”

That is resilience in spades.

And if we become adept at resiliency, failure can be a great teacher. The history student who pulls an all-nighter, dashes off 800 words on Napoleon, and hands the essay to the teacher in the morning, only to have it returned splashed with red ink and a grade of D, may absorb a lesson as well as a poor grade. He rebounds, and begins his next paper a week ahead of its due date.

The next time your high school sophomore fiddles around on the Xbox all evening and then flunks his biology test, or your daughter forgets to bring to school that math homework the teacher checks daily, pause and think before you decide whether to intervene.

Learning to take responsibility and to rebound from failure can be painful, but possession of it is one of the keys to a great life.

Jeff Minick
Jeff Minick lives and writes in Front Royal, Virginia. He is the author of two novels, “Amanda Bell” and “Dust on Their Wings,” and two works of nonfiction, “Learning as I Go” and “Movies Make the Man.”