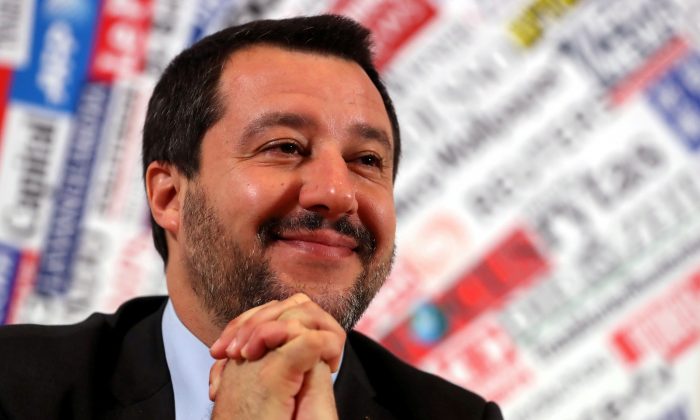 Italy’s Salvini Sees No Danger to Government in Coming Months

MILAN—Italian Deputy Prime Minister Matteo Salvini said Dec. 31 he “did not see any danger” to the government in the coming months as it turns its attention to new reforms after finally pushing its 2019 budget into law.

Parliament approved the much-contested budget Dec. 29, just ahead of a year-end deadline, following a deal with the European Commission that calmed financial markets and averted a risk of financial fines against Rome.

“I hope this will be the last budget to be approved via long and complicated negotiations with Brussels,” Salvini said in an interview with newspaper Il Corriere della Sera, adding that he hoped EU veto power on state finances would soon be shelved.

Matteo Renzi, a former prime minister and ex-leader of the center-left opposition Democratic Party, predicted Dec. 31 that the coalition could break up before European parliamentary elections scheduled for May 26.

Renzi told La Stampa daily that the ruling parties—the League and 5-Star Movement—were deeply divided over an array of issues and said the government would surely split apart.

“But we won’t head to early elections,” he said, predicting instead either a major coalition reshuffle or the creation of a new ruling alliance from the various parliamentary strands.

Salvini, who heads the League, dismissed the idea.

“You do not change a winning team,” Salvini said in comments on his Facebook page.

Salvini said among the first measures the government would tackle in the New Year were a bill to strengthen “legitimate defense” rights for ordinary people and also a push for greater autonomy for the northern regions of Veneto and Lombardy.

Prominent League leaders have warned that the 7-month-old coalition will fall if its devolution plan is blocked by a clearly reticent 5-Star.

While the League’s strongholds are in the rich northern regions of Italy, 5-Star votes are concentrated in the country’s poorer south. The southern regions are worried that they will receive less funding in future if Lombardy and Veneto get to keep more of their own tax take.

“Handing over more power to regional governors and city mayors will benefit both north and south. Spending decisions taken by local administrations avoid waste and robbery,” Salvini wrote on Facebook.