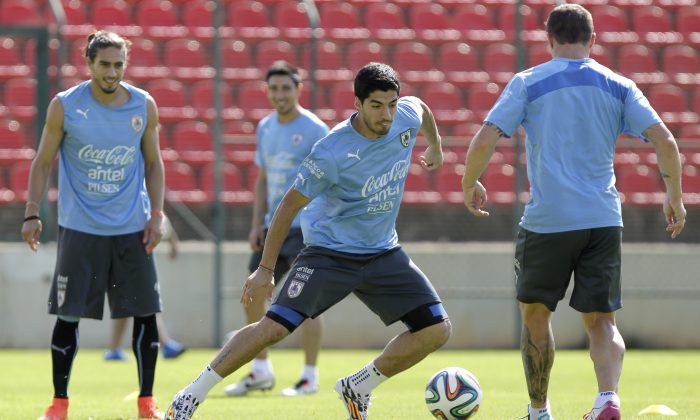 NATAL, Brazil—Ciro Immobile is joining Mario Balotelli in attack for Italy, while Uruguay will rely on Luis Suarez and Edinson Cavani again for their decisive Group D match at the World Cup on Tuesday.

Balotelli spearheaded Italy’s attack in a 4-1-4-1 for the Azzurri’s opening two matches but now Immobile will line up alongside him in a 3-5-2.

Also, Mattia De Sciglio returns at wing back for Italy after missing the opening two games due to an injured thigh muscle, and Leonardo Bonucci comes on to anchor the defense.

Uruguay is using the same 11 from its 2-1 win over England.

Suarez declared Monday that his surgically repaired left knee is in “perfect shape,” which appeared evident when he scored twice against England.

Uruguay midfielder Alvaro Pereira was in the lineup again after sustaining a head injury against England.

Uruguay must win again to advance while Italy needs only a draw to reach the last 16.

A half hour before kickoff, the temperature at the Arena das Dunas was a sizzling 33 C (91 F), although overcast skies and a light drizzle with the humidity at 45 percent made it bearable.