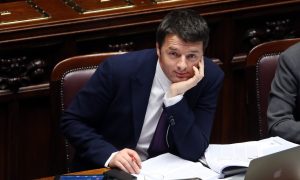 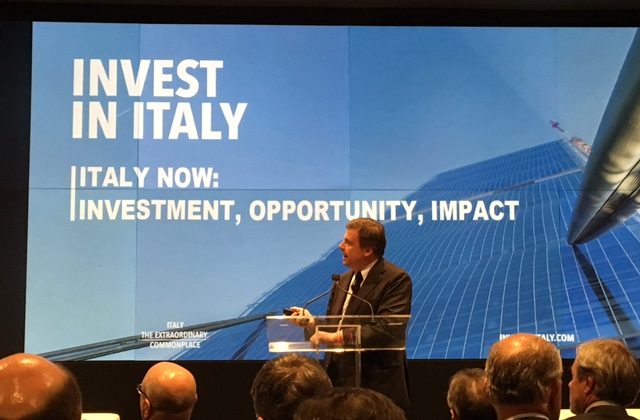 ‘Italy Is Back’ and Ready for Investors

“Italy is exiting the crisis. The crisis has been deep but also confirmed the resilience of the economy,” said Italy’s Minister of Economy and Finance Pier Carlo Padoan on a Youtube video with the title “Beyond the clouds–Italy is back.”

As the economic climate is settling down in Italy, the government is now ambitious to boost foreign investments with its new motto: “Italy is back.”

The Italian Trade Agency (ITA) has recently kicked off “Invest in Italy” global roadshow in an effort to promote foreign investments and trade relations. As part of this roadshow, a meeting was held at Bloomberg headquarters in New York City on Jan. 11, 2016.

“Now is the right time with the right conditions to invest in Italy,” said then Deputy Minister of Economic Development Carlo Calenda at the meeting (on Jan. 20 he was appointed Italy’s ambassador to the EU). Calenda spoke to potential investors and local entrepreneurs in New York. He presented the measures and policies implemented by the Italian government to attract and sustain foreign investments.

Despite the fact that there is still a difficult road ahead, foreign investment represents a crucial element for the country’s growth, said Calenda.

In addition to initiating legislative reforms in a number of sectors, Italy has adopted a new governance model for attracting investment, including reforms to streamline and simplify the procedures required to start and operate a business in Italy.

Many economic indices show Italy is recovering from the economic crisis that hit Europe over the past few years. The gross domestic product (GDP) growth was 0.8 percent in 2015. The GDP growth has turned to positive for the first time since 2012, and the government expects 1.6 percent growth this year.

I think there is a magic moment. I have never seen such a strong interest to Italy before.
— Claudio Costamagna, president, Cassa Depositi e Prestiti

Italy is the third largest economy of the eurozone and the 8th largest in the world, with a GDP more than $2.1 trillion, according to International Monetary Fund (IMF). Italy’s GDP is bigger than Russia’s or India’s.

The country is attractive for investors, with a population of more than 60 million and a per capita income of $36,000. For over 30 years, Italy has been the second largest manufacturing economy in Europe after Germany and the 6th or 7th top manufacturer in the world, according to the World Bank.

Claudio Costamagna, president of Cassa Depositi e Prestiti (CDP), which is the country’s sovereign wealth fund, also attended the roadshow. Costamagna spoke to investors about the strategic role of CDP in the process of attracting investments in Italy.

“I think there is a magic moment. I have never seen such a strong interest to Italy before,” said Costamagna. CDP facilitates private investments by preparing Italian companies and real estate assets in a way so they become marketable to foreign investors, said Costamagna.

Illy emphasized the importance of Italian culture and said, “It is one of the biggest assets of our country. It inspires creativity in manufacturing.”

Illy said most Italian companies are still family owned with strong roots and creative culture. Investors who are willing to buy these companies have to maintain these roots and the culture in order to be successful in Italy, he advised.

Joyce mentioned that GE Aviation has been operating in Italy since 1924 with 12,000 employees. The company acquired Italian aviation company Avio Aero for 3.3 billion euro (nearly $3.7 billion) in 2013.

“This investment was our opportunity to create a center of excellence in Europe, and Italy is a good place for that with great schools, great technical people, and a reformist and pro-industry government,” said Joyce.

He praised the education system in Italy, as well as the talent and expertise of young people in Avio Aero.

“We are quite bullish on Italy and our ability to work with this government,” said Joyce.

The Italian delegation traveled to San Francisco to attend the second stop on the roadshow on Jan. 13.