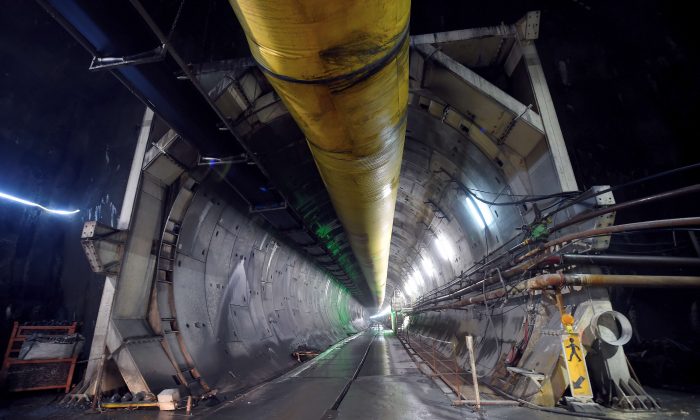 Part of the tunnel of the TAV high-speed train line in Saint-Martin-de-la-Porte, France, on Nov. 13, 2018. (Massimo Pinca//File Photo/Reuters)
Europe

ROME—A dispute in Italy’s coalition over the future of a high-speed rail link with France escalated suddenly on March 7 and raised the risk of a government collapse, with one party chief accusing his partner of acting irresponsibly.

The Alpine rail line is backed by the ruling League party, but is fiercely opposed by its coalition partner, the 5-Star Movement, which argues Italy’s share of the funding would be better spent upgrading existing roads and bridges.

After League leader Matteo Salvini said in an evening television interview he wouldn’t back down and his party would “never sign” a decree to block the project, 5-Star chief Luigi Di Maio accused him of threatening to bring down the government.

“He will bear the responsibility before millions of Italians,” Di Maio said in a statement. “I consider this to be irresponsible behavior.”

The TAV project (Treno Alta Velocita) is a joint venture between the Italian and French states to link the cities of Turin and Lyon with a 36-mile tunnel through the Alps, on which work has already begun.

The European Union has pledged to fund up to 40 percent of costs, Italy up to 35 percent, and France as much as 25 percent.

Italian Prime Minister Giuseppe Conte said earlier on March 7 that recently updated traffic projections for the line warranted a review of the project’s long-term viability and, if necessary, a renegotiation of the way the funding is split.

He told reporters he had strong personal doubts about the validity of the venture and he would take responsibility for a final decision based on a cost-benefit analysis already carried out by the government.

That analysis, commissioned by Transport Minister Danilo Toninelli, a 5-Star politician, found the TAV was a waste of public money.

Conte, who isn’t a member of either ruling party but is closer to 5-Star, called the funding of the TAV “iniquitous” and said he would speak to France and the EU “to share our doubts and perplexities.”

By Gavin Jones and Giuseppe Fonte.