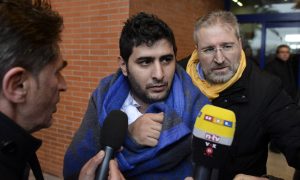 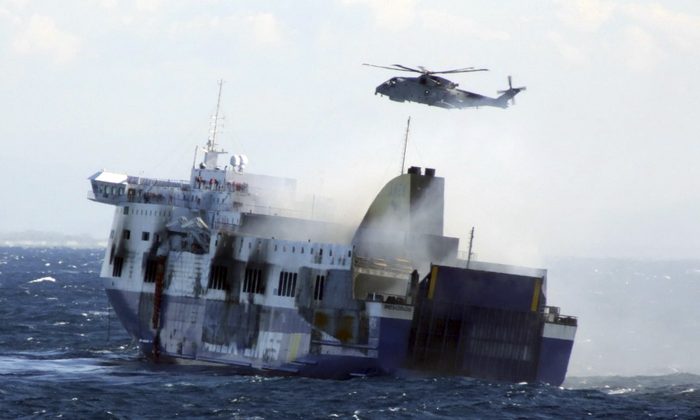 In this image released by the Italian Navy, smoke billows from the Italian-flagged Norman Atlantic that caught fire in the Adriatic Sea, Monday, Dec. 29, 2014. (AP Photo/Italian Navy, ho)
Europe

TIRANA, Albania—Italian prosecutors on Tuesday ordered the crippled Greek ferry Norman Atlantic back to Italy as part of a criminal investigation, saying they feared more bodies will be found once the vessel is properly searched given the presence of stowaways and huge discrepancies in the names on the manifest and those rescued.

The fire-tinged vessel was adrift for a third day off the Albanian coast, where two sailors were killed earlier Tuesday when a tow line being deployed apparently snapped, according to Albanian officials.

The coast guard said another body from the ferry was found Tuesday, bringing the toll so far to 11. Three of the dead were Italian truck drivers who worked for the Naples-based Eurofish company and had gone to pick up eel shipments in Greece. The company was closed for the day in mourning.

More than 400 people were rescued from the ferry, most in daring, nighttime helicopter sorties that persisted despite high winds and seas, after a fire broke out before dawn Sunday on a car deck. Both Italian and Greek authorities have announced criminal investigations into the cause of the blaze.

Bari prosecutor Giuseppe Volpe, who ordered the ferry back to the Italian port of Brindisi, said it was likely that other bodies will be found in the cargo areas of the ferry once searched, given that there was “incontrovertible” evidence that migrants were stowed away onboard. Two Afghans and a Syrian were among the 49 who disembarked in Bari on Monday morning, one of whom had already asked for political asylum, he said.

“Our fear is that unfortunately once the wreck is recovered, we’ll find other dead people on board,” he said.

The search for possible missing people continued in the seas off Albania amid ongoing confusion over how many passengers were on board. The ferry company said there were 475 on board, but Volpe said there were at least 18 “overbookings” and an untold number of stowaways.

Greek maritime officials, meanwhile, revealed that the first word about the problems on board the ship came from a passenger, not the crew, calling an emergency number.

“We are aboard the Norman Atlantic of Anek lines heading for Ancona and it is on fire. My name is Argyris Stavros, the ship is on fire and they don’t know what to do. I don’t know what time it is, what time is it? It’s 5:40.” according to a recording of the call played out during a news conference.

As an Italian ship with about 180 of the survivors on board headed toward Brindisi, salvage companies were working to secure tow lines to begin moving the ferry, hampered by high winds and seas.

Italian judicial authorities have enlisted the Italian tug company, Barretta, to take charge of bringing the Norman Atlantic ferry to Brindisi. No timeframe was given, but Barretta said it could arrive within a day.

Besides Barretta, the ship owner’s insurance company has contracted the Dutch salvage firm Smit to secure the wreck.

Smit spokesman Martijn Schuttevaer said one line was connected by early Tuesday and that the priority was to get a heavier tow line connection, aided by the arrival of larger tugs. It wasn’t clear if that was the operation underway when the Albanian sailors were struck.

Schuttevaer said crews were also going through the vessel to extinguish any remaining fire.

“There is still smoke,” he said.

But Volpe cautioned that only Barretta was legally responsible for bringing the ferry to Italy. Schuttevaer noted that “prosecutors are not going to pick up the bill for the salvage,” and that the ship owner’s insurance company would.

A ship carrying 39 survivors was diverted from the southern Italian port of Manfredonia to Taranto because of poor weather, adding another 12 hours or more to their journey to dry land. The survivors include five children and three people who are injured.