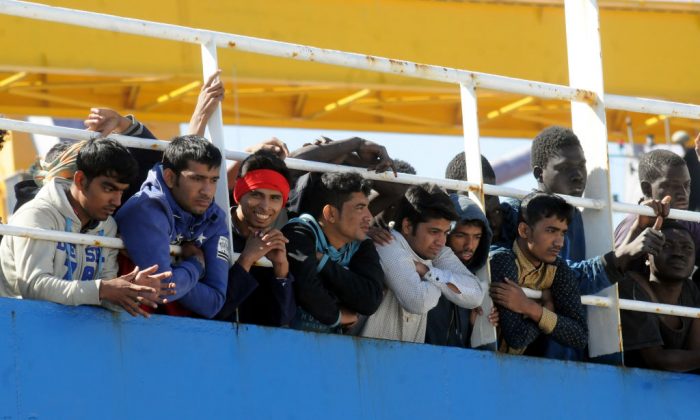 Men wait on the deck of merchant ship "Tuna 1", at their arrival along with 470 migrants and refugees in the port of Palermo after being rescued at sea off the Libyan coasts, on April 18, 2017. (ALESSANDRO FUCARINI/AFP/Getty Images)
International

ROME—Italian mobsters took charge of one of Europe’s largest migrant reception centers, using a Roman Catholic charity organisation as a cover to cream off millions of euros in state funds, prosecutors said on Monday.

Police arrested 68 people in early morning raids in the southern toe of Italy, including a priest and the head of the local Misericordia association that manages the Sant’Anna Cara immigrant center in the town of Isola Capo Rizzuto.

The fenced-in centre can house up to 1,200 migrants, and mobsters from the powerful ‘Ndrangheta mafia managed to infiltrate the operation a decade ago, taking charge of key services such as catering and laundry, prosecutors said.

Of some 103 million euros ($113 million) of state funds dispatched to the centre between 2006-2015, at least 36 million finished in the hands of the mobsters, police said.

“If 500 migrants had to have lunch, just 250 meals would arrive at the centre. The other 250 would either have to eat in the evening, or else the next day,” prosecutor Nicola Gratteri told a news conference.

“In the meantime the head of the Misericordia, the priest and their friends grew fat, bought luxury cars, flats and boats,” he said.

There was no immediate comment from any of those arrested.

The Florence-based national Misericordia association said in a statement it had full faith in the judiciary and was placing the southern migrant centre under special administration.

Police sequestered goods and property worth 84 million euros in their early morning sweep. Some 200,000 euros was found at the house of one man who had declared annual earnings of just 800 euros to the tax man, Gratteri said.

The head of parliament’s anti-mafia commission hailed the operation. “The Cara of Isola Capo Rizzuto had become a money printing operation for organised crime thanks to the complicity of those who ran the centre,” Rosy Bindi said.

“This operation shows the ability of the mafia to take advantage of the weaknesses and fragility of our times with its predatory and parasitic approach,” she added.

Police said many of those arrested belonged to the Arena clan of the ‘Ndrangheta mafia—Italy’s largest organised crime group which is based in the region of Calabria and is one of Europe’s biggest cocaine importers.

The Arena family shared out the illicit funds with other clans, bringing to an end brutal mafia warfare in the area and ushering in a period of mob peace, prosecutors said.

They said the Arenas were also suspected of muscling in on the management of a refugee centre on the island of Lampedusa, which is on the front line of Italy’s ongoing migrant crisis.

Italy has been a destination for sea-borne migration for years. More than half a million have reached Italy in the latest wave since 2014, mostly by boat from neighbouring Libya.

The government has set up reception centres across the country to take care of the new arrivals, which are run by private entities and charities.

Opposition politicians accused the centre-left government of turning a blind eye to years of malpractice, saying it was symbolic of its failure to handle the migration flows.

“Immigration is big business for criminals … and the government is an accomplice,” said Matteo Salvini, head of the anti-migrant Northern League party. “Stopping this invasion, by any means possible, has become a duty,” he wrote on Facebook.