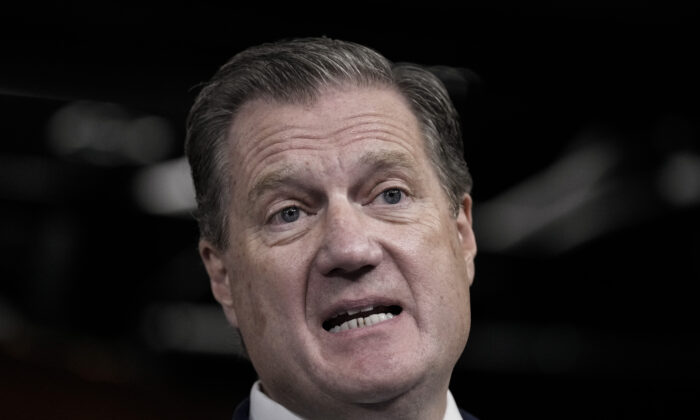 It Would Be ‘Incredibly Unusual’ for DOJ to Charge Trump After Not Charging Clinton, Comey: Rep. Turner

The Department of Justice would likely be applying the law unequally if it charged former President Donald Trump over his handling of classified information after U.S. prosecutors chose not to pursue charges against other top U.S. officials who have mishandled such information, including former FBI Director Jim Comey, a top Republican says.

“It would be incredibly unusual for the Department of Justice to decide—when they didn’t pursue former FBI Director Comey, when they didn’t pursue Hillary Clinton, who had classified documents in her home with Bill Clinton, former president—to pursue President Trump over an issue with the archivist,” Rep. Mike Turner (R-Ohio), the top Republican on the House Intelligence Committee, said on Fox News on Aug. 28.

Comey leaked classified information to his lawyers in violation of Department of Justice (DOJ) policies, according to DOJ Inspector General Michael Horowitz.

Horowitz referred the matter to the department, which declined prosecution.

But the bureau said Clinton did not violate a law that makes it a felony to mishandle classified information because there was no evidence she “intended” to violate the law and another like it, Comey announced in September 2016.

“In looking back at our investigations into mishandling or removal of classified information, we cannot find a case that would support bringing criminal charges on these facts. All the cases prosecuted involved some combination of: clearly intentional and willful mishandling of classified information; or vast quantities of materials exposed in such a way as to support an inference of intentional misconduct; or indications of disloyalty to the United States; or efforts to obstruct justice. We do not see those things here,” Comey said at the time.

FBI agents raided Trump’s home in Florida on Aug. 8. Court filings unsealed since then show U.S. officials said there was reason to believe Trump was violating several laws, including one governing the use of national defense information.

A redacted copy of the search warrant affidavit—which convinced a judge to approve the warrant—showed that agents relied heavily on the finding of materials marked classified in boxes transferred from Mar-a-Lago to the U.S. archivist in January.

The FBI agent who authored the affidavit said there was probable cause to believe that other classified materials were still being stored at Mar-a-Lago, necessitating a raid.

Turner wasn’t impressed with the line of thinking, asserting that the affidavit was missing “some imminent national security threat that would justify raiding the president’s home” and that the Department of Justice could have taken a different path, such as seeking enforcement of a subpoena they had for the documents.

Turner also noted that none of the unredacted portions of the affidavit cite intelligence officials, and said Director of National Intelligence Avril Haines indicated to him in a recent letter that her office was not looped in until after the raid happened.

“This sounds more like a bookkeeping issue than [that] of a national security threat, which means it doesn’t rise to the level of justifying raiding the former president’s home,” Turner said.

The FBI deferred comment to the DOJ when asked if it consulted intelligence officials before the raid. The DOJ did not immediately respond to a request for comment. Haines’s office, which has said it will assess the national security risk from the documents, declined to comment.

Turner’s views are shared by many Republicans, but not all. Most Democrat lawmakers have said the raid appeared justified.

Schiff called the details “alarming” and called for a national security damage assessment. Intelligence officials confirmed over the weekend that they’re planning to undertake such a review.