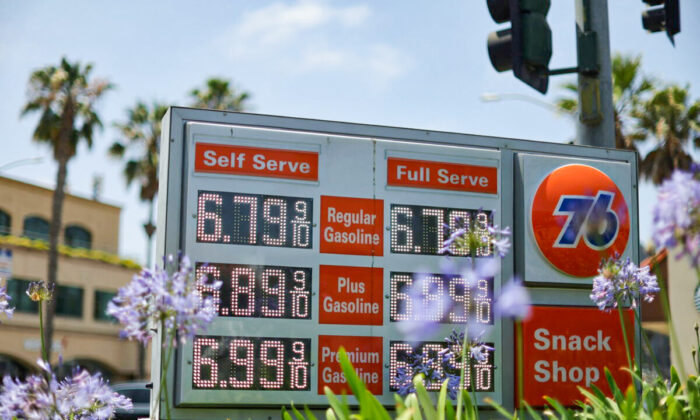 Gas prices exceeding $6 per gallon are advertised at a 76 Station in Santa Monica, Calif., on May 26, 2022. (Lucy Nicholson/Reuters)
Northern California

‘It Was a Mistake’: California Gas Station Manager Fired Over Blunder That Led to 69-cent Gasoline Sales

A manager at a gas station in California has reportedly been fired from his job after accidentally listing gas at 69 cents per gallon, giving drivers a speedy discount.

John Szczecina ran the Shell gas station in Rancho Cordova and made the costly mistake on June 9.

The former manager says he accidentally put a decimal in the wrong spot while listing the gas price, which should have been $6.99 per gallon.

The blunder, which Szczecina insists was an accident, reportedly cost the gas station between $16,000 and $20,000 and left Szczecina without a job.

“Well, it was a mistake that I did, you know,” Szczecina told KOVR in Sacramento. “And I thought, ‘This is a nightmare.’ I put all three prices on there except the diesel, but the last one kind of didn’t go, you know, right.”

“So I just took responsibility for it and I said, ‘Yeah it’s my fault, and I’m to blame,'” Szczecina said.

News of the heavily-discounted prices quickly spread on social media, triggering long lines at the station as drivers sought to fill up their tanks at a fraction of the price they would typically pay.

Szczecina told KOVR that he was fired on June 13.

His family members have since launched a GoFundMe seeking to raise the lost funds and reimburse his former employer. As of June 16, the fundraising page had generated just over $14,000.

The page, set up by Szczecina’s sister, states that “he is being held responsible for the glitch that the station was unable to stop for 3 hours as local people lined up for $0.69 cent gas per gallon” and that he “may be sued.”

It adds that Szczecina is doing this “because it is the right thing to do.”

An update to the page on June 14 states that the total dollar loss was $20,000 and that the “manager was giving his termination notice today.”

Business attorney Craig Simmermon told KOVR that employees are protected from liability in cases like Szczecina’s.

“The only way he would be responsible outside of a written agreement is if he was acting outside the scope of his employment,” Simmermon said. “For instance, if his boss said ‘whatever you do, don’t ever set the price on that gas pump,’ and then he did.”

The awkward mistake comes as gas prices across the nation are an average of $5.009 as of June 16, according to AAA, although in California those prices are substantially higher at $6.428 per gallon.

Experts have warned that those prices could jump further amid potential supply issues.

“For now, the upward momentum may slow down, but we are still just one potential jolt to supply away from heading even higher,” said Patrick De Haan, head of petroleum analysis at GasBuddy, on June 13.

De Haan added that while demand for gas has continued to rise seasonally, is it still “well below previous records.”

“Should the rise in price finally start to slow demand’s rise, we could see some breathing room, but for now, it seems like Americans are proving resilient to record highs,” the analyst said.

According to De Haan, Americans are now spending $730 million more each day on gasoline than they were in 2021.