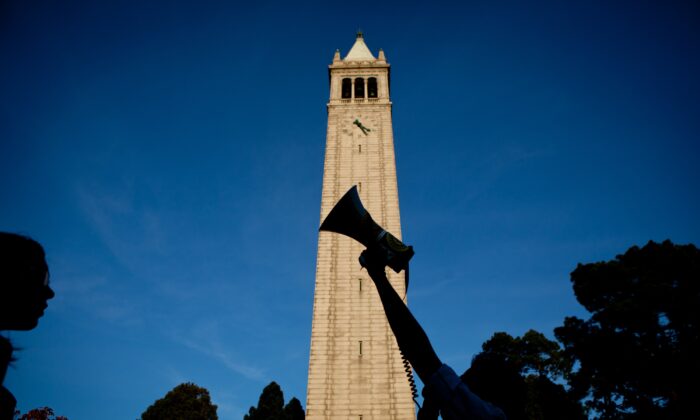 University of California–Berkeley students march through campus as part of an "open university" strike in solidarity with the Occupy Wall Street movement in Berkeley, Calif, on Nov. 15, 2011. (Max Whittaker/Getty Images)
Viewpoints

It Pays to Be an Activist

Do you recall the shrieking undergrad at Yale, the one yelling at professor Nicholas Christakis on the quad? As the professor spoke calmly to dozens of students surrounding him, at one point, she commanded him to shut up, tossed a few f-words at him, and wondered how he ever got his faculty post in the first place.

Some in the group appeared to be livid over an email sent by his wife, a lecturer at Yale, telling students to ease up on the “cultural appropriation” sensitivities as Halloween approached. (The Christakises were faculty residents in student housing.) The video of the event shows a crybullying struggle-session process at work, and the inability of the professor to stop it.

Across the country, as the video circulated across the internet, people were amazed that undergraduates spoke to distinguished Ivy League professors that way. It wasn’t so long ago that an action such as this one would draw an expulsion of the student the very next day. But that didn’t happen here.

First, the Christakises sent out a letter of apology to students, regretting the offense they had caused. As for the students, well, here is how The Wall Street Journal described the fate of two of them. Instead of handing out punishments, Yale gave these “prominent Christakis critics” its Nakanishi Prize, which rewards students who “have provided exemplary leadership in enhancing race and/or ethnic relations at Yale College.”

The university hailed one of them as a “fierce truthteller” focused on “issues of land usage, cooperative economies, and reparations in the American South.” The other one, a sociology and education studies major, was cited for having “worked to improve Yale’s racial and ethnic relations through his academic work,” whatever that means. As for the student who went on the tirade against Christakis, she is now at a distinguished law school in the Northeast, enjoying a diversity fellowship and leading a “Women of Color” group.

This is no surprise. I saw the pattern while researching my new book, “The Dumbest Generation Grows Up: From Stupefied Youth to Dangerous Adults,” which documents how bitter and disappointed millennials become a few years after graduating from college. Within that pattern lay a paradox, however: The most miserable and victimized social justice warriors often end up with extraordinary support and success. They speak of their troubles, the pain they’ve endured in a racist, sexist society, but have managed to compile impressive resumés and elite contacts.

The student body president eager to stamp out patriarchy lands in a not-for-profit foundation with a mountainous endowment, her job being to push for women’s rights through international organizations such as the United Nations. The undergraduate who headed a students of color association gets an internship with a Democrat in the state capitol or on the Hill. And, of course, corporate America and academia and state governments need diversity consultants. Who better to fill the post than a young activist with institutional experience and protest cred?

When I was in college in the 1980s, there were a few of these warrior-types around, people fuming over nuclear weapons and energy, divestment from Israel and South Africa, and the United States in Central America (those were the going topics I recall). They staffed tables along Bruin Walk, calling to passersby, but few responded. They had their roles in the undergraduate world, but we expected they’d have nowhere to go once their four years had passed and the real world beckoned. The business world wouldn’t want them, nor would government bureaucracies, nor academia save for a few spots in social welfare departments and the “studies” programs. It was a loser pathway.

Not anymore. Social justice has become a career, a promising one. Take a look at the material success of the founders of Black Lives Matter, or the salaries of diversity deans, or the money critical race theory advisers make. Every business that goes “woke” has to hire a few of them, while wealthy foundations give them fellowships and grants, such as the Ford Foundation’s massive bankrolling of numerous organizations devoted to “inclusive democracy.” And the job market looks good, too—very good. According to a 2018 study, the University of Michigan employs fully 93 diversity administrators.

This means that the young activist crowd is here to stay, at least for the near future. It doesn’t matter that the American people can’t stand them. Ordinary citizens find them obnoxious, pampered, selfish, entitled, and dictatorial, but they hardly notice. When opportunities are plentiful, when the best universities and richest foundations approve of you, these angry kids can easily turn their unpopularity into the virtue of martyrdom. They have a place among the elite; the elite have made a special place for them. It’s a bubble, yes, but a comforting one.

One wonders, however, what will happen to them as the years pass. At the beginning, the actions are exhilarating. A march on the college president’s office, a bonfire on the day Donald Trump won. They put these 19-year-olds at the center of history for a few electrifying hours. But after they graduate and start work, how many times does it take for the actions to become routine? They’re stuck with the habit—it has worked too well for them to change course.

But when it becomes a job, a policy, and a program conducted year after year, a 9-to-5 execution, how can they maintain the thrill? Moral righteousness helps, but the “movement” feeling, the revolutionary mood, doesn’t last, and that’s a comedown. Labor turns into a search for villains, racists, and sexists, and phobes who will give life moral meaning once more. Donald Trump was a blessing, a figure whom they could distort into an old-fashioned, power-mad bigot, a sure sign that activists are still crucial to social well-being in America.

It’s a game that gets more empty every year. The evidence against President Trump was nonexistent, as was the proof of “systemic racism,” an “epidemic” of transphobic violence, and all the other wild leftist allegations. Still, as I said, the young social justice warrior is a permanent feature of the American landscape. The colleges produce them and the employment pipeline rewards them. I’m glad I retired from the American higher education system when I did.