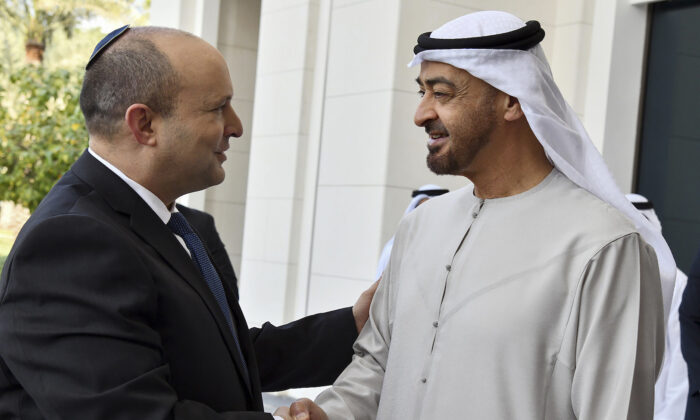 It was the first time ever an Israeli premier held an official visit with a de facto ruler from the United Arab Emirates (UAE). Bennett described the meeting as “historic,” explaining that a number of regional issues were discussed during his stay.

“I’m finishing a good visit here in the United Arab Emirates,” Bennett said. “Throughout the day, we had meaningful, in-depth and straightforward talks about our two nations, about the region and about our economy and technology and what we can do together.”

“I’m flying back to Israel, very optimistic that this relationship can set an example of how we can make peace here in the Middle East,” he added.

The meeting comes amid concern about ongoing advances in Iran’s nuclear program, which was also on the agenda and was among the reasons for the diplomatic move. The two countries, however, made no mention of the nuclear program in a joint statement.

Israel and the UAE have long shared common anxiety over the program, but the UAE has been working on improving relations with Tehran.

Ahead of renewed talks, Israel said last month it will not be bound by any new deal. The country has been outspoken in its criticism of the global nuclear talks with Iran, which are aimed at restoring a 2015 nuclear deal that placed curbs on the country’s nuclear program in exchange for relief from sanctions.

The deal unraveled after President Donald Trump withdrew the United States from it in 2018, and Israel says it would be a mistake to return to the agreement.

In November, Bennett described Iran, which denies it is pursuing nuclear arms, as being at “the most advanced stage” of a nuclear weapons program.

“The mistake we made after the first nuclear deal in 2015 will not repeat itself,” he said in statements at the security forum in Herzliya, Anadolu Agency reported. “From the moment the deal was signed, it was like a sleeping pill for us,” he added.

White House officials said last week it is preparing for other options in case diplomacy with Iran fails. The talks were stalled several times since resuming in late November. A new round of discussions resumed on Dec. 9, with Iran’s top negotiator saying he was sticking to positions Tehran set out previously.

“Iran is serious about reaching an agreement if the ground is paved (toward a deal) … The fact all sides want the talks to continue shows that all parties want to narrow the gaps,” chief negotiator Ali Bagheri Kani told reporters after an opening meeting with world powers on Dec. 9.