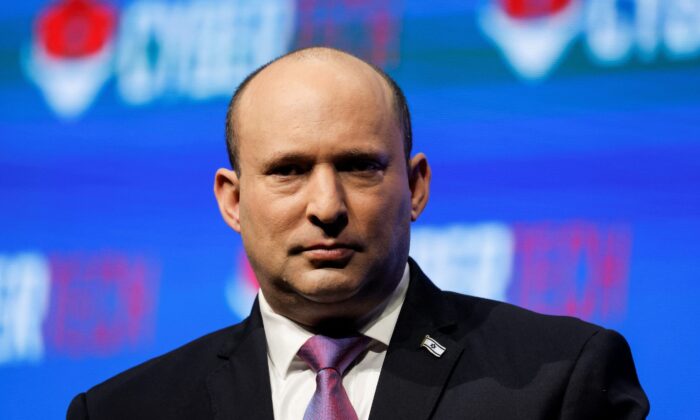 Israeli PM Meets Putin in Moscow, Then Speaks With Zelensky by Phone

Bennett is coordinating his efforts in the crisis with the United States, France, and Germany, an Israeli official said.

After his meeting with Putin, Bennett headed to Berlin for talks with German Chancellor Olaf Scholz, his spokesperson said.

French President Emmanuel Macron had spoken to Bennett before he flew to Moscow to brief him on his own conversations with Putin, the Elysée Palace said.

“They will stay in touch with the aim of obtaining a ceasefire, and this in coordination with German Chancellor Olaf Scholz,” an Elysée official said.

In their three-hour meeting in the Kremlin, the Israeli official said, Bennett also raised with Putin the issue of the large Jewish community caught up in the war in Ukraine.

Bennett said on Sunday after returning from talks with Putin, that Israel will continue trying to mediate between Russia and Ukraine even if success seems unlikely.

Ukraine has requested that Israel serve as intermediary, citing the government’s good relations with both Kyiv and Moscow. Bennett’s office said he had spoken three times over the weekend with Zelensky.

In televised remarks to his cabinet, Bennett gave no details on his three-hour Kremlin meeting with Putin on Saturday, saying only that it had “the blessing and encouragement of all parties”—an allusion to the United States, among other powers.

“We will continue to assist wherever this is requested, even if the chances are not great,” Bennett said. “The moment there is even a small opening, and we have the access to all sides and the capability, I see it as a moral duty to make every attempt.”

The two leaders spoke again by phone on Sunday, the Kremlin said, and discussed Bennett’s “most recent contacts with leaders of a number of countries.”

Israel’s Health Ministry said its country will send medical teams to Ukraine this week to set up a field hospital that will provide treatment for refugees.

While Israel, a close ally of the United States, has condemned the Russian invasion, voiced solidarity with Kyiv and sent humanitarian aid to Ukraine, it has said it will maintain contact with Moscow in the hope of helping to ease the crisis.

Bennett and Putin on Saturday also discussed the ongoing talks between world powers, including Russia, and Iran about reviving a 2015 nuclear deal.

Russia said on Saturday that Western sanctions imposed on it over its invasion of Ukraine had become a stumbling block for the Iran nuclear deal. Israel opposes any revival of the deal.

Bennett, a religious Jew, flew to Moscow in violation of Sabbath law because Judaism permits this when the aim is to preserve human life, his spokesperson said.

He was accompanied by his Ukrainian-born housing minister, Zeev Elkin. Elkin had in the past accompanied former prime minister Benjamin Netanyahu as an interpreter in his talks with Putin.