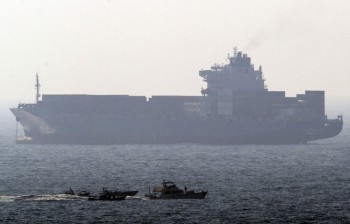 Shannon Liao
Shannon Liao is a native New Yorker who attended Vassar College and the Bronx High School of Science. She writes business and tech news and is an aspiring novelist.
View profile
Follow
biggersmaller
Print
The French Gaza flotilla ship, Dignité/Al Karama, was seized by four Israeli naval ships this Tuesday morning, 40-50 miles away from the Gaza coast.

Israeli Defense Forces (IDF) said that they offered the ship an invitation to dock at the Israeli Port of Ashdod to unload their cargo of humanitarian aid. This offer was rejected, thus leading to the seizure.

The Free Gaza Movement website makes it clear that their mission was to break through “Israel’s illegal blockade” of Gaza and makes no mention of providing humanitarian aid.

An IDF statement said that once the ship is led to Ashdod, its passengers would then be "turned over to officials from the Israel Police, the Immigration and Population Authority and the Interior Ministry," says an IDF statement.

Currently there is no contact with the ship’s 16 passengers who are in Israeli custody. Organizers sent a letter to the European Parliament asking that action be taken to re-establish communication via satellite or telephone with the passengers.

In response to the seizure, flotilla organizers said they would hold a rally in central Athens on Tuesday 7:00 p.m. local time in protest.

The ship had been allowed to sail from the Greek island of Kastelorizo whose mayor was born in Gaza, the Free Gaza website reported on July 17.

Prior to the ship’s capture, a statement from Free Gaza said that they could not predict how Israel would behave as the ship approached but that Dignité/Al Karama intended to reach its destination.

Gaza is ruled by the terrorist organization Hamas. IDF has said before that the flotilla organizers want to dispute Israel’s right to repel a group that has terrorized Israel for years.

The Dignité/Al Karama is part of a 10-ship flotilla with participants from various countries such as France, Canada, Greece, Sweden, and Tunisia, whose goal is to protest the Israeli blockade on Gaza. Many of the flotilla’s ships have been intercepted by Greek authorities.

Greece had showed its support for Israel by refusing the flotilla permission to leave Greek ports. Greece has offered to transport humanitarian aid to Gaza without the flotilla’s help, but activists have refused the offer.

The crew of the American ship, The Audacity of Hope, ended their journey in early July to return home to their jobs and families.