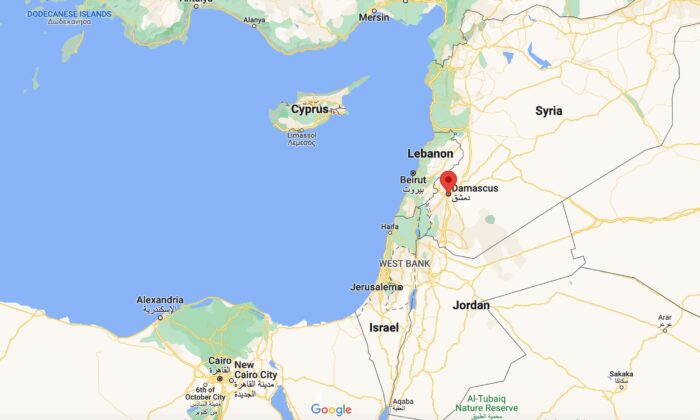 The Syrian capital Damascus is shown in red on a map. (Google Maps/Screenshot via The Epoch Times)
Middle East

Four Syrian soldiers were killed on Wednesday, Syria’s defense ministry said, in an Israeli missile attack on positions near Damascus that a war monitor said had hit an arms depot.

The Syrian Observatory for Human Rights also reported a higher death toll of five Syrian troops and four soldiers of other nationalities, adding that the strike had hit at least five different positions outside the capital.

The monitor did not provide more details and Reuters could not immediately confirm its report.

The Syrian ministry, in a posting on Facebook, said the strike caused material damage.

Syria’s state news agency said the missiles were launched from the town of Tiberias in northeastern Israel, and most were shot down by Syrian air defenses.

Syria’s military has relied on support from allied fighters from Iran and Russia as well as paramilitaries from Iraq, Lebanon, and Afghanistan to take back territory lost since the start of its civil war in 2011.

Israel has regularly targeted what it described as Iranian-linked targets in Syria, seeing them as expansions of Tehran’s influence.

Its most recent strikes on April 14 hit areas outside Damascus, but did not cause casualties, according to state media.

A pro-government commander did not immediately respond to a request for comment on whether the Israeli strikes early Wednesday had targeted his positions or killed any of his fighters.