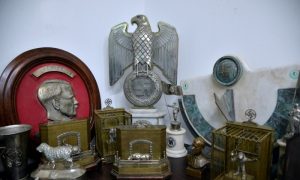 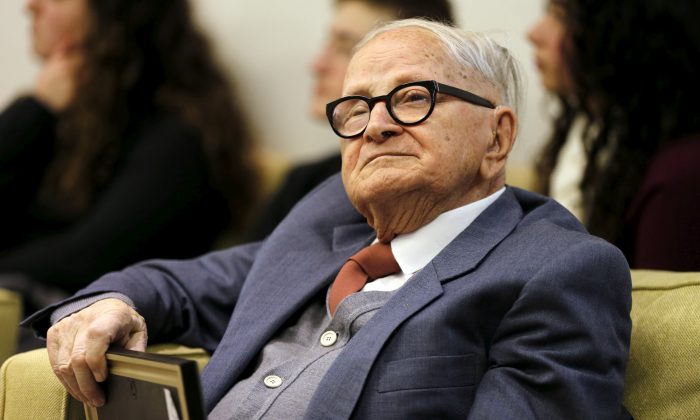 Rafi Eitan, who was involved in the capture of Adolf Eichmann, an architect of the Nazi Holocaust, sits during a ceremony to mark 55 years since the Eichmann trial of at Israeli President Reuven Rivlin's residence in Jerusalem Jan. 27, 2016. (REUTERS/Ammar Awad/File Photo)
World

JERUSALEM—Rafi Eitan, a former Israeli minister and veteran spy who led the operation to capture fugitive Nazi mastermind Adolf Eichmann, died on Saturday at the age of 92.

“We have lost a brave fighter whose contribution to Israel’s security will be taught for generations to come,” President Reuven Rivlin said.

Eitan died after being hospitalized in Tel Aviv, YNET news website and other Israeli media reported.

Eitan played an influential role in the early years of Israel’s intelligence agencies.

In 1960, he was in charge of the Mossad operation that led to the capture of Eichmann, an architect of the Nazi Holocaust, who was living in Argentina under an assumed identity.

Eichmann was taken to Israel where he stood trial for crimes against humanity, was found guilty and hanged.

“Operation Finale,” a film about Eichmann as the Nazi mastermind who fled to Argentina to work in a factory to hide the fact that he personally marched six million Jews to their extermination was released in August 2018.

Eitan was also involved in the planning and implementation of the attack on the Iraqi Osirak nuclear reactor in 1981, according to Israel’s Foreign Ministry.

He then headed Israel’s Bureau of Scientific Relations, which was involved in the scandal surrounding Jonathan Pollard, a U.S. naval intelligence analyst arrested in 1985 and sentenced in 1987 to life imprisonment for spying for Israel.

Israel has said Pollard was recruited in a rogue operation by the since-disbanded bureau. Eitan assumed responsibility for and resigned over the affair, according to the Foreign Ministry.

Eitan was elected to parliament in 2006 for three years and served as pensioners minister.

According to CIA files declassified in 2017, Adolf Hitler, the leader of Nazi Germany, may have escaped Germany and lived until at least 1955 when he went to Argentina from Colombia.

According to a document that remained secret until October 2017, a source told the U.S. Central Intelligence Agency that he was contacted by a trusted friend who served under his command in Europe.

The friend told the CIA source in 1955 that Phillip Citroen, a former German SS trooper, told him that Hitler was still alive.

Up until the release of the JFK Assassination Files, most historians agreed that Hitler died in Germany in 1945. According to the official account, it is believed that Hitler committed suicide on April 30 when Germany’s capital was surrounded by the Red Army. His body and that of his wife, Eva Braun, were carried outside, thrown into a bomb crater, doused with gasoline and burned.

When Berlin was captured in May, the bodies of Hitler, Braun, and several other top Nazi officials were repeatedly buried and exhumed. Decades later, a Soviet KGB team exhumed the corpses again, burned them, crushed them and scattered the remains into a local river.

As a result, the only confirmation that the remains belonged to Hitler was obtained through a dental analysis of the lower jaw obtained from the remains.

The CIA source is codenamed “CIMELODY-3” in the document. A hand-written note on the report states that CIMELODY-3 is “fairly reliable.”