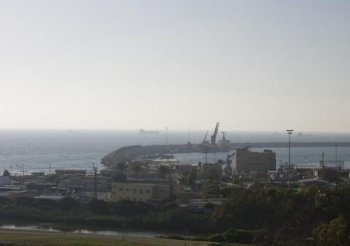 By Genevieve Belmaker and Gidon Belmaker
Print
PORT OF ASHDOD, Israel—A member of the Israeli naval commando unit that helped capture the Marvi Marmara, the largest ship in the Gaza flotilla, delivered a brief statement to approximately 30 members of the world press and 20 foreign diplomats on Monday evening.

"They were looking to kill us, absolutely to kill us,” said the commando member, who also said he was unarmed when he dropped onto the Marmara.

The press briefing took place at a secret location at an Israeli naval base in the Port of Ashdod, approximately 25 miles south of Tel Aviv.

The commando member, was only identified as First Sgt. Y, and read a prepared statement and took no questions. The press was also not allowed to photograph him or get his full name.

The foreign diplomats, including Dutch and Greek, who had not been allowed to contact any passengers, were trying to get information about their citizens. Some names were provided to diplomats after the press briefing.

During the briefing, First Sgt. Y recounted in a prepared statement that he was part of a commando unit that dropped onto the deck of the Marmara from helicopters. He was in the first chopper. He said that all of the members of his unit who landed on the deck were attacked by a mob of 10-15 people.

The sergeant appeared badly shaken and was cradling his left arm before he spoke.

According to First Sgt. Y, the activists were armed with steel clubs, knives, and pepper spray. Some of the commandos were thrown off the boat into the water. Video footage being circulated on the Internet of the clash corroborates many of the soldier’s accounts. Other reports said that the flotilla activists tried to break the soldiers' arms and legs.