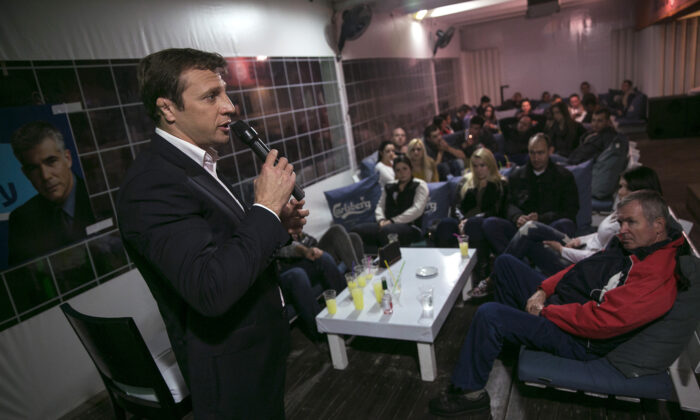 Yoel Razvozov, a lawmaker of the centrist Yesh Atid party, addresses Russian-speaking Israelis as he campaigns in a pub in Bat Yam, south of Tel Aviv, Israel, on Feb. 8, 2015. (Baz Ratner/Reuters)
Middle East

JERUSALEM—Israel will host the Miss Universe beauty pageant in the Red Sea resort of Eilat on Dec. 12 despite imposing travel restrictions to try to stave off the Omicron coronavirus variant, Tourism Minister Yoel Razvozov said on Sunday.

On Saturday Israel announced that it was banning foreigners from entering the country, but Razvozov on Sunday told reporters that participants in the Miss Universe pageant would be granted waivers while possibly undergoing PCR testing every 48 hours and other precautionary measures.

“This is an event that will be broadcast in 174 countries, a very important event, an event that Eilat, too, is very much in need of,” he said before Sunday’s weekly cabinet meeting.

“We will know how to manage this event. So, by using the waivers committee, we will have events like this, to which the country already committed itself and cannot cancel.”

In televised remarks at the cabinet meeting, Prime Minister Naftali Bennett said that Israel needs “to clamp down” on its borders to keep the country “open internallly”.