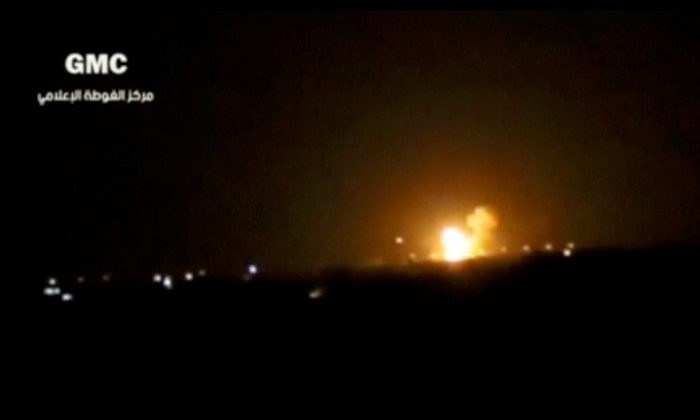 A video posted to social media shows explosions and rising flames, said to be in Damascus. (Social Media Website via Reuters TV)
International

Video carried on Lebanese TV and shared on social media showed the pre-dawn airstrikes caused a fire around the airport east of the Syrian capital, suggesting fuel sources or weapons containing explosives were hit.

Syrian state media said Israeli missiles hit a military position southwest of the airport, but did not mention arms or fuel. It said “Israeli aggression” had caused explosions and some material losses, but did not expand on the damage.

Israel does not usually comment on action it takes in Syria. But Intelligence Minister Israel Katz, speaking to Army Radio from the United States, appeared to confirm involvement.

“The incident in Syria corresponds completely with Israel’s policy to act to prevent Iran’s smuggling of advanced weapons via Syria to Hezbollah,” he said. Prime Minister Benjamin Netanyahu had “said that whenever we receive intelligence that indicates an intention to transfer advanced weapons to Hezbollah, we will act”, he added.

An Israeli military spokeswoman said: “We can’t comment on such reports.”

Lebanon’s al-Manar television, which is affiliated with Hezbollah, said early indications were that the strikes hit warehouses and fuel tanks. It said there no casualties.

Russia and Iran Back Assad

Syrian President Bashar al-Assad is backed in his six-year-old civil war by Russia, the Iranian regime and regional Shi’ite militias. These include Hezbollah, a close ally of Tehran and enemy of Israel, which describes the group as the biggest threat it faces on its borders. The two fought a month-long war in 2006.

Syrian military defectors familiar with the airport say it plays a major role as a conduit for arms from Tehran.

Alongside military planes, there are a number of commercial cargo aircraft that fly from Iran to resupply arms to Hezbollah and other groups. The flights go directly from Iran to Syria, passing through Iraqi airspace.

As well as weapons, hundreds of Shi’ite militia fighters from Iraq and Iran have been flown to Damascus international airport. Intelligence sources put their numbers at 10,000 to 20,000 and say they play a significant role in military campaigns launched by the Syrian army.

Israel has largely kept out the war in Syria, but officials have consistently referred to two red lines that have prompted a military response in the past: any supply of advanced weaponry to Hezbollah, and the establishment of “launch sites” for attacks on Israel from the Golan Heights region.

Speaking in Moscow on Wednesday, where he was attending a security conference, Israeli Defence Minister Avigdor Lieberman reiterated that Israel “will not allow Iranian and Hezbollah forces to be amassed on the Golan Heights border”.

During his visit, Lieberman held talks with Russian Defence Minister Sergei Shoigu and Foreign Minister Sergei Lavrov, as part of efforts by Israel to coordinate with Moscow on actions in Syria and avoid the risk of confrontation.

A statement from the Defence Ministry said Lieberman had expressed concern to the Russian ministers over “Iranian activity in Syria and the Iranian use of Syrian soil as a base for arms smuggling to Hezbollah in Lebanon”.

A Western diplomat said the airstrikes sent a clear political message to Iran, effectively saying it could no longer use Iraqi and Syrian airspace to resupply proxies with impunity.

Speaking to Reuters in an interview in Washington on Wednesday, Katz, the intelligence minister, said he was seeking an understanding with the Trump administration that Iran not be allowed to establish a permanent military foothold in Syria.

Israeli officials estimate that Iran commands around 25,000 fighters in Syria, including members of its own Revolutionary Guard, Shi’ite militants from Iraq and recruits from Afghanistan and Pakistan.

Israel has also said that Hezbollah has built up an arsenal of more than 100,000 rockets, many of which would be capable of striking anywhere within Israel’s territory. The last conflict between the two left 1,300 people dead and uprooted more than a million Lebanese and 300,000 to 500,000 Israelis.