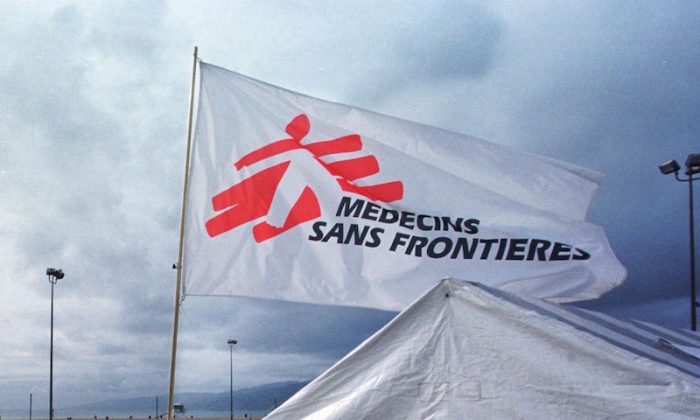 File Photo: A flag with the logo of Medecins Sans Frontieres (Doctors Without Borders), an international humanitarian aid organisation, flies over a mock refugee camp set up along the boardwalk of Santa Monica beach in California on Oct. 26, 2000. (Lee Celano/AFP/Getty Images)
Middle East

JERUSALEM—Israel said on Aug. 23 a Palestinian gunman killed by its forces on the Gaza Strip border this week was a nurse working for Medecins Sans Frontieres (Doctors Without Borders) and that it was seeking an explanation from the international aid group.

Israel’s liaison office for Gaza, Cogat, named the Palestinian as Hani Majdalawi and said he was shot dead on Aug. 20 after shooting and throwing a grenade at soldiers.

“We have reached out to Doctors without Borders for clarification regarding the matter,” a Cogat spokesman said.

The organization later confirmed in a statement that Majdalawi had been killed but did not elaborate.

“MSF is working to verify and understand the circumstances regarding this extremely serious incident, and is not able to comment further at this stage,” it said.

Its website says the group runs three burns and trauma centers in Gaza, whose Islamist Hamas rulers have fought three wars against Israel in the last decade.

Gaza authorities did not confirm Majdalawi’s death, saying that would require having his body, which they believed was being held by Israel. The Israeli military said it could not immediately confirm this.

No armed Palestinian factions claimed Majdalawi as a member.

Responding to Israeli media reports on Majdalawi’s killing, his brother, Osama, described the married 28-year-old on Facebook as a “martyr” who had “bought the weapon with his own money” and acted “completely independently”.

The Facebook post said Hani Majdalawi had worked for Doctors Without Borders and that he had been “the most socially, psychologically and economically stable among his brothers”.

Gaza has seen an almost five-month surge in confrontations along the border, where Palestinians have held weekly, sometimes violent mass demonstrations, drawing Israeli army gunfire. At least 170 Palestinians have been killed.

By Dan Williams and Nidal al-Mughrabi