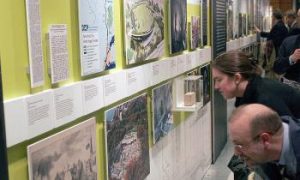 The Future Beneath Us: Eight Great Projects Under New York
0
Middle East

Print
An Israeli report says it acted within the bounds of international law when it raided a fleet of six ships bound for Gaza in May last year.

According to the first part of the report released on Sunday by the public commission to examine the Gaza flotilla raid set up by the Israeli government, Israeli soldiers “acted professionally and in a measured manner in the face of extensive and unanticipated violence” during the raid.

“The actions carried out by Israel on May 31, 2010, to enforce the naval blockade had the regrettable consequences of the loss of human life and physical injuries,” concluded the Tirkel Commission as its known. But “the actions taken were found to be legal pursuant to the rules of international law.”

Nine activists of Turkish origin were killed after Israeli soldiers boarded one ship, the Mavi Marmara, carrying around 590 passengers and crew in the early morning on May 31.

The report states that Israeli soldiers were beaten and shot by activists when they tried to board the boat. What began as a takeover operation, the report describes, became soldiers fighting for their lives.

The commission examined video footage of the Israeli soldiers descending onto the vessel from a helicopter by rope. “Each one of them was attacked immediately upon landing on the roof by a number of violent activists, most of them wearing life jackets and some of them wearing gas masks, with rods, objects thrown at them, pushing, and punching.”

The report also maintained the legality of Israel’s blockade against the Gaza Strip, saying it was “lawful and complied with the rules of international law, in view of the security circumstances and Israel’s efforts to fulfill its humanitarian obligations,” reads the report.

Two observers, retired Canadian Brig. Gen. Kenneth Watkin and Lord David Trimble from the U.K., were appointed to monitor the work of the commission. They also submitted their assessments. “We have no doubt that the commission is independent,” they wrote in an official letter.

While they acknowledged the Israeli Arabs on the Mavi Marmara who gave evidence, they regretted that more testimony was not received from the side of the activists.

“We are glad that the commission made repeated efforts to hear both sides, extending to making arrangement for evidence to be given by video conferencing and offering to take evidence in a neutral location. We regret that these offers were not taken up,” they wrote.

Turkey responded with immediate condemnation of the report. Turkish Prime Minister Recep Tayyip Erdogan, said the report had "no value or credibility," according to Al Jazeera.