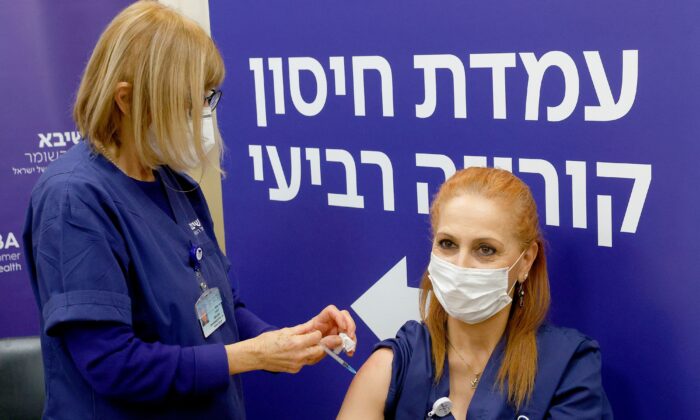 An Israeli nurse receives a fourth dose of the Pfizer-BioNTech COVID-19 vaccine at the Sheba Medical Center in Ramat Gan near Tel Aviv, on Dec. 27, 2021. (Jack Guez/AFP via Getty Images)
WORLD

Israel Records 1st Case of Patient With Both COVID-19 and Flu, Dubbed ‘Flurona’

Israel has recorded what is widely believed to be the first case of “flurona” disease, a double infection of coronavirus and seasonal flu in an unvaccinated pregnant woman, according to local reports.

The unnamed woman displayed mild symptoms at Rabin Medical Center in the city of Petah Tikva on Dec. 30, Hamodia reported. She is doing well and was expected to be discharged from the hospital later on Thursday, according to officials.

“She was diagnosed with the flu and coronavirus as soon as she arrived. Both tests came back positive, even after we checked again,” said professor Arnon Vizhnitser, an obstetrics and gynecology specialist and the director of the hospital’s Gynecology Department. “The disease is the same disease; they’re viral and cause difficulty breathing since both attack the upper respiratory tract.”

Vizhnitser said he is seeing more and more cases of individuals who have contracted both coronavirus and seasonal flu at the same time. Both contagious respiratory illnesses can present similar symptoms such as a cough, sore throat, fever, muscle or body aches, and fatigue.

“Last year, we did not witness flu cases among pregnant or birthing women,” Vizhnitser said. “Today, we are seeing cases of both coronavirus and the flu that are starting to rear their head.”

While the majority of people who contract the flu tend to recover within a few days or weeks, in some it can lead to life-threatening complications such as pneumonia, inflammation of the heart (myocarditis), and multi-organ failure, although this is rare.

Last week, a 31-year-old pregnant woman died in Jerusalem after contracting the flu, The Times of Israel reported. The woman, who gave birth to a son via cesarian section at Hadassah Medical Center, passed away shortly after being placed on a ventilator due to respiratory complications. Her child was said to be in a stable condition.

However, Elias Mossialos, professor of health policy at the London School of Economics, has said there is no reason to panic about the so-called “flurona,” although he acknowledged that we may see an increasing number of such cases appear across the globe.

“This is not a new virus, but simultaneous infections from the coronavirus and the flu virus. It happened to a pregnant woman in Israel, but it is likely we will see several such cases in many countries,” Mossialos wrote on Facebook on Sunday.

“So, vaccination with the flu vaccine is necessary, especially for our vulnerable compatriots. That’s what health authorities around the world emphasize,” Mossialos added. “There’s no reason to panic.”

Israel was among the first in the world to introduce vaccine passports and mandatory vaccinations.

The approval came almost a week after the country’s Pandemic Expert Committee recommended the fourth shot of the Pfizer-BioNTech vaccine for immunocompromised people, people older than 60, and health care workers.

The drug is supposed to be for patients who are suffering from “mild-to-moderate” COVID-19 symptoms as a preventative measure to stop them from becoming so sick that they need to be hospitalized, officials and Pfizer have said.

Israel has ordered roughly 100,000 doses of the pills in an effort to help combat a new coronavirus wave brought about by the fast-spreading Omicron variant.

Despite this, 63.69 percent of the population is double vaccinated, while 6.91 percent is partially vaccinated, according to official data.