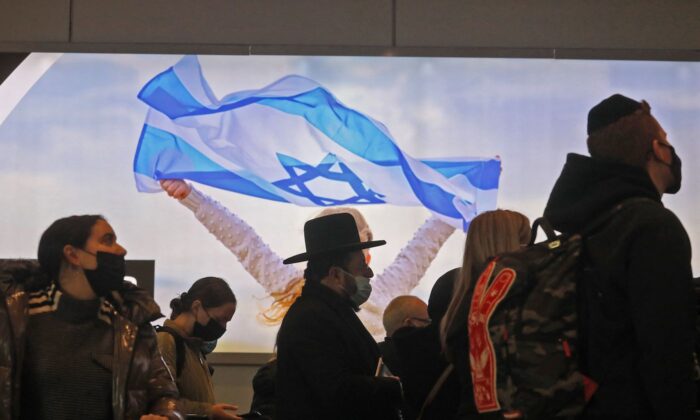 An ultra-Orthodox Jewish traveler waits in queue with other travellers with luggage at the check-in counter ahead of their departing flights at Israel's Ben Gurion Airport in Lod, east of Tel Aviv, on Dec. 21, 2021. (Gil Cohen-Magen/AFP via Getty Images)
WORLD

Officials ordered roughly 100,000 doses of the pills in an effort to help combat a new coronavirus wave brought about by the fast-spreading Omicron variant.

The doses are expected to arrive in the country by Wednesday at the earliest, Hebrew-language Channel 12 reported Saturday.

Israel’s Prime Minister Naftali Bennett spoke with Pfizer CEO Albert Bourla over the weekend to finalize the deal, as per Channel 12. The new drug will be available for free in Israel to those in high-risk groups, officials said.

The oral drug, called Paxlovid, is taken twice per day for five days in combination with a second medicine called ritonavir, which is classified as a generic antiviral drug. Paxlovid is supposed to be for patients who are suffering from “mild-to-moderate” COVID-19 symptoms to prevent them from becoming so sick that they need to be hospitalized, officials and Pfizer have said.

Paxlovid can be taken as soon as possible following a positive diagnosis of COVID-19, the disease caused by the CCP (Chinese Communist Party) virus. The drug is available by prescription only.

However, the pill is not to be used on patients for “pre-exposure or post-exposure prevention” of the virus or for individuals who have been hospitalized due to severe or critical COVID-19, the FDA said in the statement.

According to Pfizer, clinical trials showed that the oral drug was able to reduce the risk of hospitalization or death from COVID-19 by up to 89 percent when taken shortly after symptoms appear.

Back in November, Albert Bourla, Pfizer’s chief executive, called the results “a real game-changer,” that “has the potential to  save patients’ lives, reduce the severity of COVID-19 infections, and eliminate up to nine out of ten hospitalizations.”

“With more than 5 million deaths and countless lives impacted by this devastating disease globally, there is an urgent need for life-saving treatment options,” Bourla said in a press release.

“The overwhelming efficacy achieved in our recent clinical study of PAXLOVID, and its potential to help save lives and keep people out of the hospital if authorized, underscores the critical role that oral antiviral therapies could play in the battle against COVID-19,” he said.

The Biden administration has already purchased some 10 million courses of Paxlovid in a more than $5 billion agreement. In November, the White House announced that the federal government would work to ensure treatments are free and accessible for the general public.

Merck’s antiviral pill for COVID-19 also received emergency use authorization last Thursday evening in Israel, and the country is expected to receive the first doses of the drug within the next two weeks, The Jerusalem Post confirmed.

Merck’s drug, named molnupiravir, was developed with Ridgeback Biotherapeutics, and can reduce hospitalizations and deaths from the virus from 9.7 percent to 6.8 percent, clinical trials of high-risk individuals showed, according to the FDA.

The oral drug can also be used in the treatment of mild-to-moderate COVID-19 cases in adults and for whom alternative COVID-19 treatments are not accessible or aren’t clinically appropriate.

Prior to the FDA decision, the only COVID-19 antiviral treatment that had been granted emergency authorization by the FDA is remdesivir, a drug that’s being sold under the brand name Veklury.