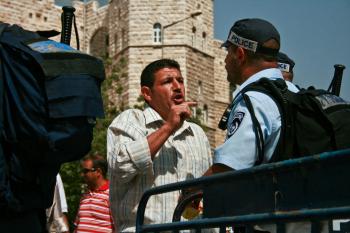 By Genevieve Belmaker
Print
TEL AVIV Israel—There is one thing that nobody ever mentioned to me about Israel before I came to live here. What's with all the questions? My Israeli husband mentioned more than once during my first month that I might notice something different about interpersonal communications in his country.

"In Israel, people like to answer questions with questions," he told me one day after a confusing back-and-forth I had with someone over a trivial matter, the details of which I've forgotten now. The gist of it was that I needed information, and asked for it. What I got in return to my question, instead of an answer, was another question.

Here's a similar, stereotypical example of what happened to me that day:

Hey, do you know what time it is?

Why? Are you going somewhere?

Something similar might happen even out in public with perfect strangers.

Does this bus go to Hamasger Street?

Where exactly are you trying to go?

This type of conversation seems to abound in Israel, and just last week, to my shock, I found I've picked up the habit. It went something like this:

Do you want a cup of coffee?

Do you have milk?

In some strange way, it actually makes a lot of sense, even as I write this and see the words in black and white. Before deciding to have a cup of coffee, of course I need to find out whether there is milk to put in it.

I think the whole business of answering a question with a question actually makes a lot of sense, at least in this part of the world. It's a way saying either a) that's not enough information b) mind your own business c) you're missing the point here.

This inquisitive style of communicating started to make sense to me last week when I was writing a story about the renewed peace talks between the Palestinians and Israelis. Each side has different needs, demands, and expectations. Each group of officials involved in the talks has many, many people to answer to for their actions. And the issues at hand are, in many ways, intractable. Actually, I strain to imagine how on earth they will solve anything with such a heavy weight of history and so many starts and stops from the past weighing them down.

So I can easily imagine Palestinian Authority President Mahmoud Abbas and Israeli Prime Minister Benjamin Netanyahu sending questions back and forth to each other during the indirect peace talks through the American envoy, George Mitchell.

"George, ask Abbas something for me in your meeting tomorrow," Netanyahu might say. "What would it take for him to relent about Israelis building in East Jerusalem?"

Then, Mitchell would go to Abbas, and return with another question instead of a reply.

Would Israelis still want to build there if it was within the borders of a Palestinian state? Abbas might question back.

What would satisfy your standards for a state? Netanyahu might answer in return.

The one problem with the question-question approach is that it can take a long time to get any answers. But if what all the locals keep telling me is true, things happen slowly in the Middle East.

As a reporter, I think I'll take that as an open invitation to take my time and ask a lot of questions, even if I don't always get answers.