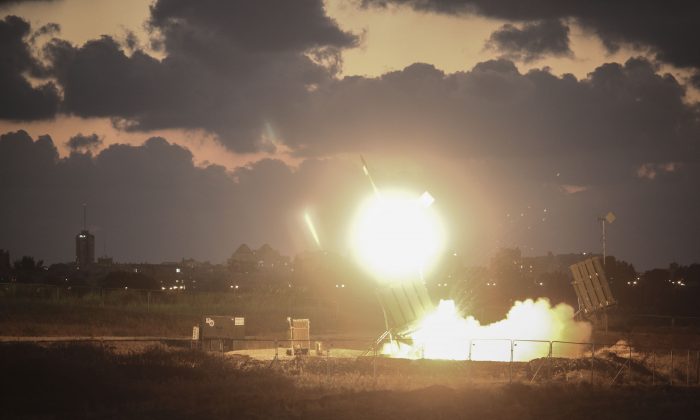 Israeli jets struck nine targets in Gaza on Sunday, according to the Israeli army, in retaliation for arson attempts and “explosive kites and balloons” that were launched at Israel.

“The [Israeli Defense Forces] attacked nine terror targets in two military compounds and a weapons manufacturing facility belonging to the Hamas terrorist organization in the northern Gaza Strip … in response to the firing of kites and explosives and the burning of  Israeli territory,” the Israeli Defense Forces said in a translated statement.

The IDF added that it treats the kite attacks as terrorist acts and will continue to retaliate against such threats. “These are terror attacks that endanger the residents of southern Israel,” the IDF said, according to YNet News.

“In recent days, the IDF warned and carried out several attacks near the cells responsible for the arsons and destruction of lands in Israel as well as infrastructure used by these cells,” the army said. “The IDF has intelligence information and the operational ability to further increase these strikes, and they will grow in strength as required. The IDF is determined to continue acting with increasing force against these terror activities for as long as it takes and with a variety of tools, until they stop,” the statement continued.

Hamas, which is considered a terrorist organization by the U.S. State Department, “will suffer the consequences” the IDF concluded.

Defense Minister Avigdor Liberman on Monday doubled down on the IDF’s warnings.

“If anyone thinks we can carry on with daily (incendiary) kites and fires, he is mistaken,” Liberman was quoted by the Jerusalem Post as saying.

On Monday, one Palestinian man was killed and four others were injured when they tried to sneak into southern Israel. That’s when “a “security infrastructure exploded” as they tried to cross the security fence border, the Jerusalem Post reported, adding that it’s not clear what caused the explosion.