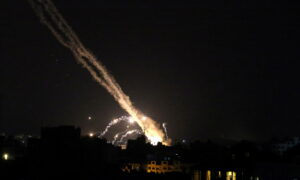 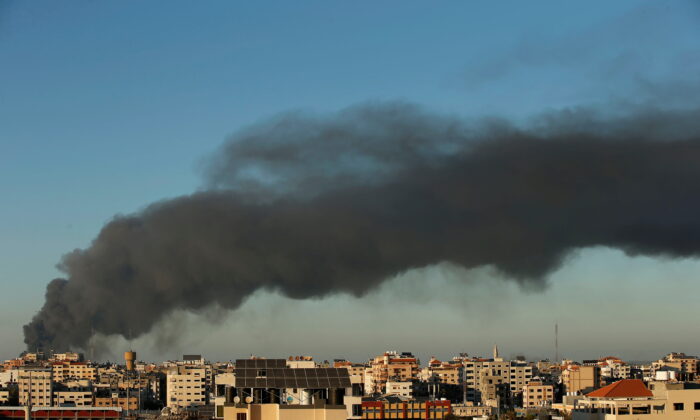 Smoke rises amid a flare-up of Israeli–Palestinian conflict, in Gaza, on May 15, 2021. (Suhaib Salem/Reuters)
Middle East

Israel bombed the home of the Hamas chief in Gaza early on May 16, and the Hamas terrorist group fired rocket barrages at Tel Aviv as hostilities stretched into a seventh day with no sign of abating.

Sinwar has led the military and political wings of Hamas in Gaza since 2017.

The Israeli military said on May 16 that it struck Sinwar’s home and that of his brother Muhammad, another senior Hamas member. On May 15, it destroyed the home of Khalil al-Hayeh, a senior figure in Hamas’s political branch.

Israel has recorded 10 deaths, while health officials in Gaza have reported at least 148 people killed since the violence began last week.

Both Israel and Hamas have insisted they would continue their cross-border fire, a day after Israel destroyed a 12-story media building in Gaza City, which housed an Associated Press and Al Jazeera bureau.

Israel gave advance warning of the strike so it could be evacuated. The Israeli military said later the building was a legitimate military target because it contained military assets of Hamas.

“The building contained civilian media offices, which Hamas hides behind and deliberately uses as human shields,” the Israeli Defense Forces said in their statement.

The Associated Press has condemned the attack, demanding that Israel put forward its intelligence as evidence that Hamas was operating in the building.

Israeli Prime Minister Benjamin Netanyahu said late on May 15 that their offensive will continue for as long as necessary.

“We will continue to act with full force. We are hitting the terrorist organization with crushing blows. Whoever lit the fire will receive fire.”

The United Nations Security Council is due to meet later on May 16 to discuss ways to restore calm.