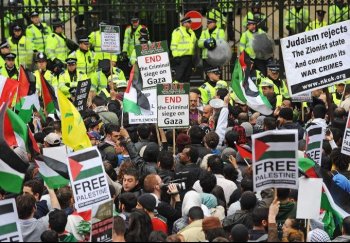 Protesters demonstrate outside the Israeli Embassy in London on May 31, when more than 10 people were killed by Israeli commandos when they stormed a ship which was part of a gaza flotilla of six ships carrying 1,000 tonnes of aid to the Gaza strip. (Carl De Souza/Getty Images)
Middle East

By Genevieve Belmaker and Gidon Belmaker
Print
PORT OF ASHDOD, Israel—Israeli authorities have confirmed that nine people from the Gaza flotilla were killed aboard the largest of the six ships, a Turkish vessel called the Marvi Marmara. Earlier estimates were that at least 10 had been killed in the violence that broke out when Israel Defense Force (IDF) soldiers overtook the Marmara.

Three of the six ships in the flotilla bound for Gaza arrived at the Port of Ashdod Israel throughout Monday.

The first boat to arrive at the port, at approximately 10:30 a.m. local time (3:30 a.m. EDT) had 19 activist passengers aboard. According Mickey Rosenfeld, foreign press spokesperson for Israel police, 16 of the passengers refused to give their names or show identification. Three others, among them British and Irish citizens, did identify themselves and are in the process of being transferred to Ben Gurion International Airport where they will be deported to their home countries. The other 16 will be sent to Be'er Sheva prison.

According to Rosenfeld, they will be held until they identify themselves and sign an agreement that they will not come back to Israel and break the law.

None of the activists aboard the first three ships to arrive at the port have been charged with any criminal offenses. Two of the ships had only crews aboard but no passengers.

The Marmara, the ship with the largest number of passengers in the flotilla, approximately 500, is expected to arrive at the Port of Ashdod between 6:00 p.m. and 7:00 p.m. Monday evening local time.

The Israel Defense Force will hold a briefing at 7:00 p.m. (12:00 p.m. EDT) with the commander of the military team that overtook the Marmara.

Security is heavy in the Port of Ashdod with 400-500 security guards, police, military, and prison services personnel present to assist with the transfer of the activists.