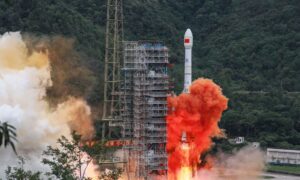 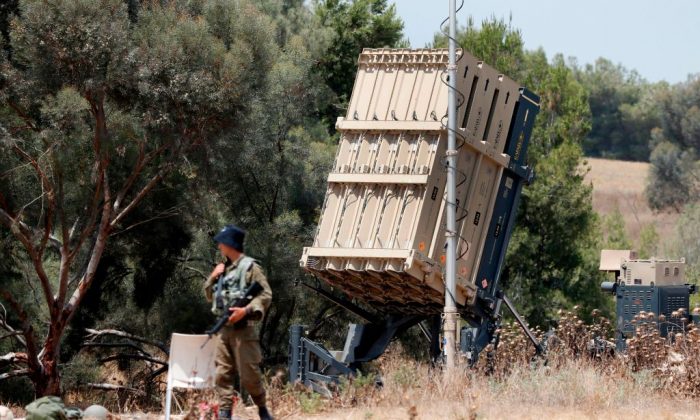 Israeli soldiers stand guard next to an Israeli Iron Dome defence system, designed to intercept and destroy incoming short-range rockets and artillery shells, deployed along the border with the Gaza strip on May 29, 2018. (JACK GUEZ/AFP/Getty Images)
Middle East

On May 29, the Israeli army said they destroyed a tunnel created by the Hamas terrorist group in the Gaza strip area that went through Egyptian and Israeli territory.

Israel Defense Forces (IDF) said they discovered the passage still in its construction phase near the Kerem Shalom Crossing, through which humanitarian aid is transferred to Gaza residents.

The IDF said the tunnel was designed for “terror purposes and weapons smuggling,” adding that was the second such tunnel detected near the crossing and the 10th tunnel found since October last year.

The tunnel was used to infiltrate and attack Israel.

“Instead of using humanitarian aid to better the lives of Gazans, Hamas uses the crossing for terror purposes,” the military said.

The offensive strike against Hamas comes after the Palestinian Islamic Jihad terror group launched a barrage of mortars and rockets at Israeli communities in the area surrounding the Gaza Strip on May 29. Most of the shells were intercepted by the IDF’s Iron Dome aerial defense system.

One of those rockets fell into a kindergarten and three IDF soldiers were injured in the attacks—two lightly and the third moderately. There were no other reports of injury or material damage.

An Israeli army official said in a briefing that the tunnel was “irregular in its characteristics” and that it was 1.2 miles in length.

“It’s an extremely long tunnel,” the official said. “It had exit shafts on the Egyptian side. It was handled with aerial assaults and in the coming hours the portion crossing into Israel will also be dealt with to complete its neutralization.”

On May 29, the United States called for an “emergency meeting” with the U.N. Security Council to discuss the latest attacks on Israel.

“The Security Council should be outraged and respond to this latest bout of violence directed at innocent Israeli civilians,” Nikki Haley, the U.S. Ambassador to the United Nations, said in a statement.