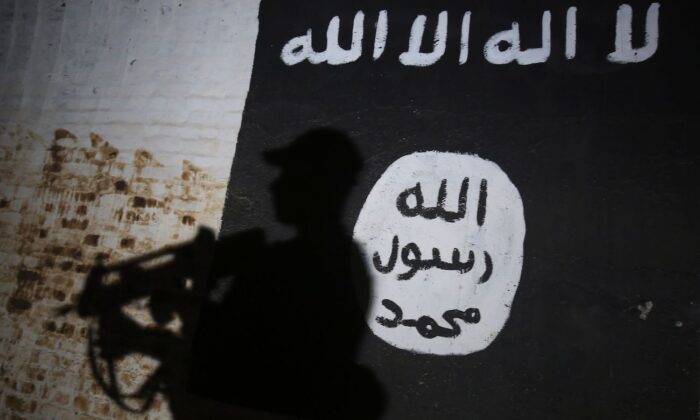 A mural bears the logo of the ISIS terrorist group. (Ahmad Al-Rubaye/AFP via Getty Images)
Crime and Incidents

A former ISIS terrorist on Sept. 2 pleaded guilty to the “brutal” kidnapping, torture, and deaths of four Americans, two of whom were journalists, the Justice Department announced.

Alexanda Amon Kotey, a former British citizen, served as an ISIS terrorist and participated in the captivity of American and European hostages in Syria.

He is among those responsible for the 2014 executions of four American citizens; James Wright Foley, Kayla Jean Mueller, Steven Joel Sotloff, and Peter Edward Kassig, all of whom died as hostages in ISIS custody.

The former ISIS militant engaged in a “prolonged pattern” of physical and psychological violence against the hostages in an effort to “control” them and compel the victims’ family members and the U.S. government to pay large monetary ransoms for their release.

Often, this would end with public beheadings that were videotaped and uploaded online, as was the case with American journalists James Foley and Steven Sotloff, aid worker, Peter Kassig, and British citizens David Haines and Alan Henning.

Kotey and alleged co-conspirator El Shafee Elsheikh, 33, whose case remains pending in the U.S. District Court for the Eastern District of Virginia, were captured together in January 2018 by the Syrian Democratic Forces as they attempted to escape Syria for Turkey.

Another member of the group, Mohamed Emwazi, who conducted the videotaped beheadings, was killed in November 2015 in a U.S. military airstrike in Syria.

He is now facing a mandatory life sentence in prison and is scheduled to be sentenced on March 4, 2022, by Senior U.S. District Judge T. S. Ellis.

“This guilty plea ensures that Kotey will spend the rest of his life in prison for the horrific crimes he has committed,” Acting Assistant Attorney General Mark Lesko for the Justice Department’s National Security Division said in a statement.

“Although there remains much work to be done in this case, we hope today’s events provide some measure of justice for Kotey’s victims and their families as they continue to grieve the loss of their loved ones. I want to thank all of the agents, analysts and prosecutors who worked tirelessly on this investigation and prosecution—their efforts are proof that the National Security Division and our partners will not rest in our commitment to hold accountable terrorists who target and attack U.S. citizens anywhere in the world.”