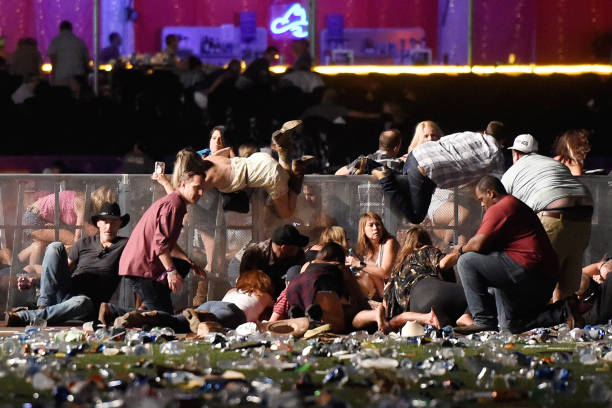 The ISIS terrorist group published an infographic in one of its propaganda outlets that claims Las Vegas mass murderer Stephen Paddock was a recent convert to Islam and ISIS terrorist.

ISIS put the infographic on the second page of the 100th issue of its al-Naba weekly online magazine, calling the shooter, “Abu Abdul Barr al-Amriki” and claiming he had converted to Islam six months ago.

Proclaiming Paddock as a soldier of the caliphate and martyr, it said he killed 60 “crusaders” and injured over 500 in Las Vegas.

The brief graphic does not provide any information that is not already publicly available, lending no further credibility to an earlier claim by ISIS.

That claim, made on Oct. 2, through encrypted messaging app Telegram, said Paddock was an ISIS soldier who was targeting coalition countries.

It made the statement through its propaganda outlet Amaq using the Telegram app originally created to help dissidents plan activities beyond the prying eyes of repressive governments.

The statement said the attacker converted several months ago. This new claim is more specific.

“An attack took place by a revolutionary soldier killing 60 and injuring over 500 crusaders in Las Vegas in America,” reads the headline of the infographic.

Listing Paddock’s age, and details of the dead and injured, the infographic offers no concrete evidence of Paddock’s ISIS affiliation. Nor has the group issued any photographs or other evidence connecting Paddock to ISIS.

“The result of the mission is 59 dead and 527 injured,” it claims, using an earlier figure that counted Paddock among the dead.

“Abu Abdul Barr al-Amriki took a room on 32 floor that overlooked the area of the concern and he started shooting continuously on the crowd using 23 pieces of weaponry and over 2,000 bullets.”

“This caused chaos and fear among many in America and in many European countries,” it continues.

“He died and was well received by god…”

The graphic also quotes from the Quran.

If the claim is false, it would be the first deliberate false claim ISIS has made to an attack in the West, according to a statement obtained by Newsweek from terror analyst Michael S. Smith II.

“Certainly, a false claim would fit with their agenda of doing even the ‘smallest thing’ to terrorize Americans, as [ISIS’s] original spokesman Abu Mohamed al-Adnani put it in his 2016 Ramadan address while calling for attacks in Europe and the United States,” read the statement.

Police and the FBI have yet to release any information on Paddock’s motives. Paddock’s youngest brother Eric Paddock has told multiple media outlets there was no indication his brother would ever carry out such an attack.

Police are interrogating Paddock’s live-in girlfriend, Marilou Danley, who Paddock dispatched to the Philippines shortly before the massacre. Sisters of Danley’s living in Australia told local news that their sister had no knowledge of the attack. Danley returned to the United States on Tuesday.

Meanwhile, ISIS continues to lose ground in every country it once had a foothold. The terror group’s claim to have established a new Islamic empire, or caliphate, has since lost credibility, taking away one of its major recruitment draws.