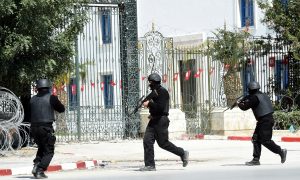 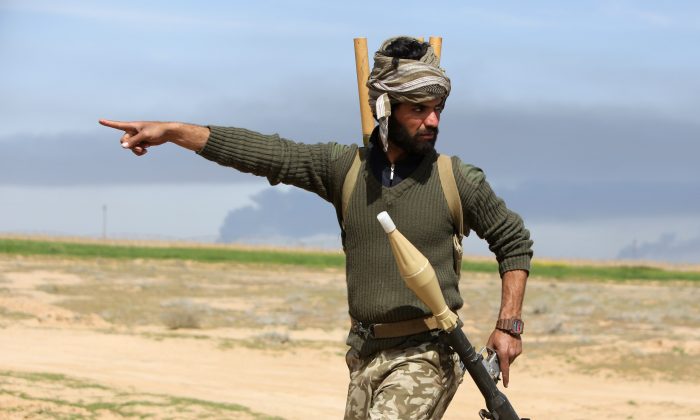 An Iraqi Shiite fighter and member of Iraq's Popular Mobilisation units supporting Iraqi government forces in the battle against the Islamic State (IS) points in the village of Albu Ajil, east of the northern city of Tikrit, on March 8, 2015 during a military operation to regain control of the Tikrit area. Some 30,000 Iraqi security forces members and allied fighters launched an operation to retake Tikrit at the beginning of March, the largest of its kind since Islamic State (IS) group forces overran swathes of territory in June. AFP PHOTO / AHMAD AL-RUBAYE (Photo credit should read AHMAD AL-RUBAYE/AFP/Getty Images)
Middle East

ISIS Not Alone in Committing Atrocities

WASHINGTON—Testimony before a congressional hearing on human rights violations committed by the Islamic State of Iraq and Syria (ISIS) painted a horrific picture of brutality and suffering.

While acknowledging the depravity of ISIS, several witnesses warned that the United States should not, at the same time, turn a blind eye to the human rights abuses and atrocities committed by its adversaries. The Tom Lantos Human Rights Commission (TLHRC) organized and convened the hearing on March 18.

The enemy of our enemy is not necessarily our friend.

That point was underscored two days later in a Washington Post interview with Gen. David H. Petraeus, reported on March 20. As U.S. commander of the Multinational Force—Iraq during the surge in 2007–2008, Petraeus knows intimately the sectarian problems in the region. In answer to a written question, he replied:

“I would argue that the foremost threat to Iraq’s long-term stability and the broader regional equilibrium is not the Islamic State; rather, it is Shiite militias, many backed by—and some guided by—Iran.”

One of the witnesses at the hearing, Sunjeev Bery, who is Amnesty International USA’s Middle East & North Africa Advocacy director, said that AI was concerned that U.S. military assistance in Syria and Iraq could lead to additional human rights abuses. “Key U.S. allies in the armed conflict with Islamic State (ISIS) have highly problematic human rights records,” he said.

Bery cited abductions and killings by Shiite militias, violations by the Iraqi government, and revenge attacks by Kurdish Peshmerga soldiers.

“Militias and security force carried out summary executions of Sunni prisoners en mass in Anbar, Diyala, and Ninewa provinces. They also destroyed numerous villages, displacing thousands of residents and kidnapping civilian, apparently for the purpose of removing Sunni from those regions,” testified Evers.

“For the first time, the U.S. is publicly voicing concerns about militia abuses,” Evers said, referring to statements, such as the one Special Presidential Envoy (former) Gen. John Allen made on March 16 in Baghdad.

Allen said, “We applaud Iraqi leaders, including His Eminence Ayatollah Sistani, who publicly called for the protection of civilians and warned against acts of revenge, recrimination, or abuse against civilians or prisoners.”

This is the challenge facing the United States and coalition forces. To bring about stability to the Iraqi territories—the stated aim of the Obama administration—U.S. policy needs to be aware of abuses committed by all the armed groups in the region, and ensure that our aid is not used to add to the human rights violations and war crimes committed by the ISIS.

The opening statement of U.S. Rep. Joseph Pitts (R-Pa.), co-chairman of TLHRC, described the crimes of ISIS, with particular emphasis on crimes committed against minorities, women, and children.

“After taking control of Mosul, ISIS demanded that Christians and other minorities convert to Islam or vacate the city. The destruction of the Christian community there follows. … Women have faced broad ranging and particularly severe set of abuses. Women who have been captured have been subjected to systematic sexual violence and enslavement. Human trafficking of women is rampant among the group.”

ISIS has a particular interest in targeting children. “The Islamic State has conscripted boys and executed those perceived of retaining allegiances to rival groups,” Pitts said.

Pitts’s indictment of ISIS violations of international norms included its treatment of prisoners of war. He said, “It has executed hundreds of Iraqi and Syrian military personnel captured during operations, frequently beheading their corpses and displaying their bodies of the dead in the town square.”

Pitts characterized ISIS in this way: “It has a theology and world view that is uncompromising and demonstrates relentless ambition.”

TLHRC Co-chair  U.S. Rep. James McGovern (D-Mass.) placed the ISIS atrocities in the wider context of the former Prime Minister al-Maliki government. McGovern said, “Before the ISIS invasion, the Iraqi government was unable to provide basic services or protect vulnerable groups, including women, children, and minorities. The last two years of the government of Maliki were a nightmare for religious and ethnic minorities.”

Petraeus wrote, “The actions of the Iraqi prime minister undid the major accomplishment of the Surge. [They] alienated the Iraqi Sunnis and once again created in the Sunni areas fertile fields for the planting of the seeds of extremism, essentially opening the door to the takeover of the Islamic State.”

David N. Saperstein, the State Department’s ambassador-at-large for International Religious Freedom recently returned from a visit to Iraq, said that among the millions of refugees that the Syrian war and ISIS conquests have forcibly displaced, religious and ethnic minorities feel especially threatened by groups like ISIS.

“Those not ascribing to the extremist brand of Sunni Muslim ideology [of ISIS], including Shi’a Muslims, other Sunni Muslims, Alawites, Christians and Assyrians, and Druids, and others, have faced mass killings, forced conversion at gunpoint, kidnappings and other atrocities,” Saperstein said.

ISIS atrocities on Assyrian, Christians, Yezidis, and Kurds are well documented during its military campaigns in Raqqa, Syria, in 2013, and Mosul and Tikrit, Iraq, in 2014, said Bassam Ishak, president of the Syriac National Council of Syria. “Men, women, and children … have been murdered, beheaded, buried alive, or forced to serve as IS fighters. Parents have watched their children be beheaded and cut in two before their eyes,” he said.

“All Christian churches in Mosul have been destroyed,” Ishak said. Most Christians have left Raqqa, which IS proclaimed to be its capital of the Syrian caliphate, he said. The largest church has been converted to the ISIS headquarters.

Ishak warned the commission of a catastrophic humanitarian disaster unfolding now in the al-Hasakeh province of Syria. ISIS forces have taken almost 30 Assyrian villages along the Khabour River. The Syriacs have only a few weapons (primarily rifles) and little ammunition to protect themselves against ISIS’s more numerous forces armed with tanks, armored vehicles, and mortars. Unless the international community intervenes, ISIS will seize the area and put millions of civilians at grave risk of death, atrocities, and expulsion of Christians from this area where their ancestors have lived for over 5,000 years.

Rami Abdurrahman, founder and director of the Syrian Observatory for Human Rights, said, that whoever thinks that the ISIS is only targeting minorities and women is mistaken. Most of the organization’s victims are Sunni Muslims, the same Islamic branch that ISIS belongs to.

The worst abuses are dealt to the Yezidi community, who are “viewed as pagans by IS and deserving only enslavement, usually for sexual purposes, or death,” Ishak said.

It’s too dangerous to travel to ISIS-controlled territory, said Erin Evers, from Human Rights Watch, and so their team traveled to Dohuk in northern Iraq and interviewed Yezidi women, girls, and men, who had recently escaped; other Yezidis who were still in captivity were interviewed by phone.

However, the story doesn’t end with ISIS atrocities, and would be sorely incomplete without mention of the widespread violations of human rights by pro-Iraqi government militias and Iraqi security forces documented by HRW, said Evers.

The territorial gains ISIS made were “largely enabled by the discontent that resulted from government policies under former Prime Minister al-Maliki,” Evers said.

Evers recounted her experience of debriefing witnesses following the ISIS nearly two month siege of Amerli, a Shiite town in northeast Iraq. The HRW report, “After Liberation Came Destruction,” released on the same day as the hearing, stated that pro-government militias, volunteer fighters, and Iraqi security forces raided Sunni villages and neighborhoods around Amerli after the retreat of ISIS and the end of fighting in the area.

“[They] looted possessions of civilians who fled during the fighting … burned homes and businesses of the villages; Sunni residents; and used explosives and heavy equipment to destroy individual buildings or entire villages,” reported HRW.

Using satellite imagery together with field research, HRW found that between early September and mid-November 2014, over 3,800 buildings were destroyed in 30 towns and villages, mostly by arson and some by uncontrolled detonation of high explosives.

Preceding the destruction, militias looted towns and villages. Twenty-four witnesses, including Peshmerga officers and local tribal sheiks, told HRW they saw militiamen taking refrigerators, televisions, clothing, and even electrical wiring before setting houses on fire, according to the report.