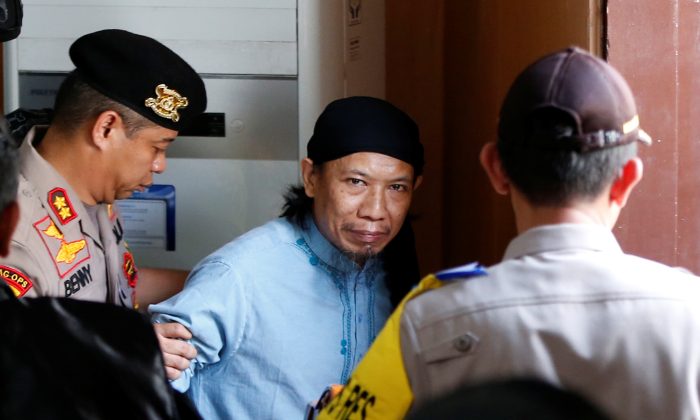 JAKARTA—An Indonesian court on Friday, June 22, sentenced to death a cleric linked to ISIS, for masterminding from his jail cell a string of deadly terrorist attacks across the world’s largest Muslim-majority country.

The ruling comes as Indonesia struggles to rein in a rising tide of homegrown terrorism, inspired in part by the terrorist group ISIS, with parliament approving tougher anti-terrorism laws last month.

Aman Abdurrahman, 46, is considered the ideological leader of Jemaah Ansharut Daulah (JAD) — a loose grouping of ISIS sympathizers in Indonesia.

“The court sentences the defendant to death,” said the judge, Ahmad Zaini, adding that Abdurrahman had been proved guilty of “carrying out terrorism.”

Abdurrahman bowed and touched his forehead to the floor on hearing the verdict, but did not respond to the judge’s query whether he would appeal against the ruling.

He was convicted of planning a 2016 gun-and-bomb attack in the heart of Jakarta, the capital, that killed eight people, including four attackers.

Abdurrahman was also proved to be behind a suicide attack last year that killed three police officers at a Jakarta bus station and the bombing of a church in Samarinda on Borneo island that wounded four children.

He was serving a sentence in a maximum security prison at the time.

Abdurrahman’s defense team told reporters the sentence was “too harsh.”

“He himself does not have the desire to appeal because he does not recognize the court or Indonesian laws,” said Asludin Hatjani, a lawyer for Abdurrahman, adding that the defense team had a week to consider filing an appeal.

Earlier, dozens of masked and heavily armed police officers stood guard as Abdurrahman, handcuffed and wearing an orange prison jacket over a blue shirt and black trousers, was escorted into the South Jakarta courthouse by counter-terrorism officers.

Security experts have raised concerns that a harsh penalty for the cleric could trigger retaliatory attacks by followers.

“The verdict provides moral support for the counter-terrorism community, but it will also make Abdurrahman a martyr to the jihadist community, whether he is executed or allowed to spend years on death row,” Concord Consulting, a risk advisory group based in Jakarta, said in a note.

Suicide bombings last month in Indonesia’s second largest city of Surabaya that killed more than 30 people and were carried out by families with young children, were linked to JAD cells and were the country’s deadliest in nearly two decades.

The US State department says the JAD grouping is a “terrorist” organization linked to numerous attacks.