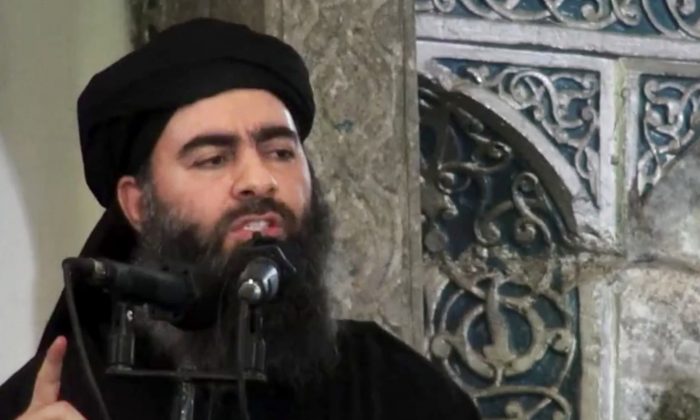 This file image made from video posted on a terrorist website Saturday, July 5, 2014, purports to show the leader of ISIS, Abu Bakr al-Baghdadi, delivering a sermon at a mosque in Iraq during his first public appearance. Al-Baghdadi has released a new message encouraging his followers to keep fighting despite recent losses. (AP Photo/Militant video, File)
Middle East

ISIS leader Abu Bakr al-Baghdadi is attempting to rally his followers through an undated audio recording released Thursday, Sept. 28, that urges them to keep fighting despite recent losses.

“Beware of retreat, or the feeling of defeat, beware of negotiations or surrender. Do not lay down your arms,” Baghdadi said in the recording.

“Oh Soldiers of the Caliphate, fan the flames of war on your enemies, take it to them and besiege them in every corner, and stand fast and courageous, he says.”

The recording comes as ISIS is routed from strongholds that defined its so-called caliphate, an Islamic empire that al-Baghdadi’s used to draw in fighters from around the world.

It has been nearly a year since Baghdadi’s last recording. Since then several reports have claimed that he may have been killed, including one claim from the Russian military that the ISIS leader was possibly among a group of ISIS commanders bombed by Russian planes near Raqqa in June.

That last recording, in November 2016, came as Iraqi forces moved to reclaim Mosul, the largest city claimed by ISIS and the terror group’s Iraq capital.

Baghdadi had then expressed confidence that the group could hold the city, telling his followers it was easier to stand their ground with honor than retreat in shame.

The war they were fighting“only increases our firm belief, God willing, and our conviction that all this is a prelude to victory,” said Baghdadi in that recording.

“Oh soldiers of Islam in every location, increase blow after blow, and make the media centers of the infidels, and where they wage their intellectual wars, among your targets.”

While the exact date of the recording is unknown, Baghdadi seems to reference recent events including North Korean threats against Japan and United States and the recapture of Mosul by Iraqi forces two months ago.

The Iraqis have pushed ISIS from most of Iraq now, and reclaimed important sites, including the ancient Great Mosque of al-Nuri at the end of June. Baghdadi had proclaimed his caliphate from that mosque almost exactly three years earlier.

ISIS terrorists blew it up as they retreated.

The battle for Mosul concluded in July and marked a major victory for anti-ISIS forces, effectively breaking any claim ISIS made on a caliphate in Iraqi territory.

That fight is ongoing and is being won street-by-street, building by building according to a U.S. military coalition spokesman. The major enemy facing Syrian forces is not soldiers, but improvised explosive devices.

ISIS has also been pushed out of Libya, losing the city of Sirte last year, sending the group into less populated areas without the ability to tax and govern that gave credence to its claims of founding an Islamic empire.

Baghdadi is calling on his followers to remain faithful, in his latest recording, telling them that the deaths of ISIS forces will not stop the effort to win the war.

“With God’s will and his strength, we are staying determined, patient … . The abundance of killing will not stop us,” Baghdadi said in the audio recording.

As with the 2016 recording, this one was released via al-Furqan media.