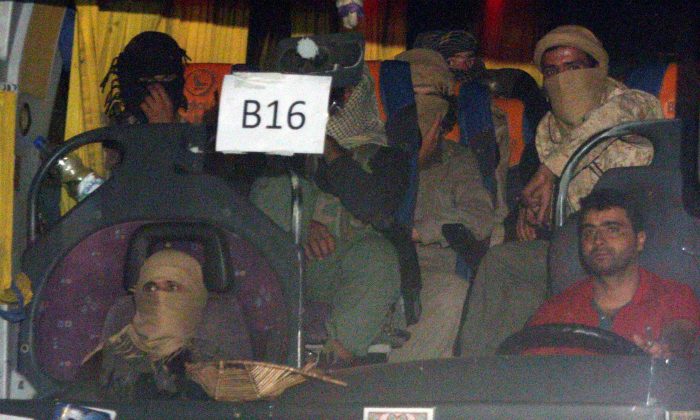 A convoy of ISIS fighters and their families begin to depart from the Lebanon-Syria border zone in Qalamoun, Syria August 28, 2017. Sources in Syria say the convoy has joined with ISIS forces in ISIS held territory. REUTERS/ Omar Sanadiki
Middle East

The ISIS convoy that was making its way from Syria’s border with Lebanon to meet up with other ISIS terrorists near the border in Iraq has reached its destination, allowing ISIS to unite once divided forces.

U.S.-led coalition forces had harried the convoy with constant aerial surveillance and air strikes and took out 40 vehicles and 85 fighters looking to reach it.

“It presented an opportunity for the coalition to strike and remove several ISIS fighters and resources from the battlefield,” coalition spokesman U.S. Army Col. Ryan Dillon told reporters earlier this month.

Those attacks left the 11 remaining buses of the convoy stranded in the desert for two weeks.

But Russia, citing a deconfliction agreement meant to keep various factions in the region from fighting each other, asked the United States to back off.

The convoy was made up of the remnants of ISIS forces that were fighting against pro-regime forces in the Al-Qalamoun area on Syria’s western border with Lebanon.

The Lebanese army and Syrian regime forces, backed by Hezbollah, launched simultaneous offensives to push ISIS from the mountainous region.

Under a deal brokered in August by Lebanese Hezbollah, key allies of the Assad regime, the ISIS terrorists and their families left the area and made their way east to ISIS-held territory in Deir Ezzor Province near Syria’s border with Iraq.

Coalition forces were not party to the deal and were opposed to it.

The Hezbollah deal allowed 600 ISIS terrorists and their family members to make their way to one of few areas ISIS retains significant fighting forces and perhaps its last true stronghold.

One Hezbollah terrorist was held captive with the convoy and released once it reached ISIS-held territory, according to the U.K.-based Syrian Observatory for Human Rights.

The Observatory maintains a network of activists across Syria and confirmed Thursday that the convoy had reached ISIS controlled areas.

Iraqi Prime Minister Haider al-Abadi criticized the deal sharply when it was brokered in August.

“We consider it an insult to the Iraqi people. Moving this number of terrorists for such a long distance through Syria is unacceptable,” Abadi told reporters. “We are fighting terrorism in Iraq and we are killing them in Iraq. We don’t send them to Syria.”

As various fighting forces win victories against ISIS, their focus turns toward Deir Ezzor. Currently, both coalition supported Syrian Democratic Forces and pro-regime government forces are homing in on ISIS positions in the province.

Dillon told reporters Thursday that closer proximity of the forces will require increased deconfliction, meaning more phone calls between the air forces and ground forces of the two armies.

The United States and Russia have worked to ensure pro-regime forces and U.S. backed SDF forces fight ISIS rather than each other.