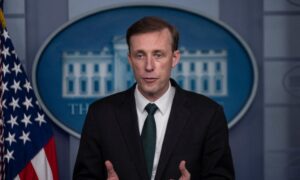 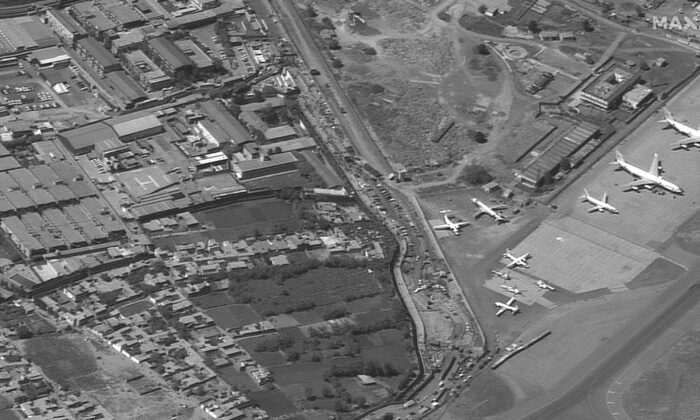 An overview of the Abbey Gate at Hamid Karzai International Airport, in Kabul, Afghanistan on Aug. 25, 2021. (Satellite image 2021 Maxar Technologies via Reuters)
Afghanistan

The ISIS terrorist group has claimed responsibility for the bombings in Kabul, Afghanistan, that killed a dozen U.S. troops.

ISIS published a photograph of a man it claimed conducted one of the suicide bombings and described the explosions as targeting American forces and their “spies.”

The bombs were set off just outside the Hamid Karzai International Airport in Kabul, which U.S. troops have been guarding since mid-August.

Thirteen U.S. troops were killed and more than a dozen others were wounded.

Kenneth McKenzie, the CENTCOM commander general, also pinned the attack on ISIS, and said the United States was preparing for more bombings.

U.S. officials had warned this week about a possible ISIS attack, including in briefings with Congress.

Military officials are continuing to coordinate with the Taliban, including conveying what they expect that terrorist group to do “to protect us,” according to McKenzie. That includes pushing the Taliban to expand the ground they are patrolling outside the airport.

There’s no indication the Taliban was involved in the attack or let it happen, according to U.S. officials.

President Joe Biden vowed recently that any action against U.S. troops would trigger a swift response. Asked about that, McKenzie told reporters it would depend on locating those behind the attack.

“If we can find who’s associated with this, we will go after them. We’ve been clear all along that we’re going to retain the right to operate against ISIS in Afghanistan and we are working very hard right now to determine attribution, to determine whose associated with this cowardly attack, and we’re prepared to take action against them. 24/7 we are looking for them,” he said.

The exact circumstances of the attack are under investigation but the preliminary understanding of the initial explosion is a suicide bomber got to the gate before setting off a bomb.

U.S. troops are in position at the gates to vet people trying to get through. The vetting includes checking for bombs or other weapons.

“There’s no substitute for a young man or woman, a young United States man or woman, standing up there conducting a search of that person before we let them on,” McKenzie said.

Before the first bomb went off, 104,000 people had been let through the gates.

Many of them were Afghans who are fleeing the country after assisting U.S. troops during the decadeslong war.

The Taliban check people at their checkpoints before letting them pass but sometimes those searches are not thorough.

The United States began controlling the airport around the time the Taliban took over the country. It’s the only ground U.S. troops control ahead of their planned withdrawal on Aug. 31.

“Right now our focus is actually going forward ensuring another attack of this nature does not occur, because as you know the pattern is typically multiple attacks,” McKenzie said, adding that evacuations were continuing.

Biden has been briefed on the attack, according to the White House. Neither he nor any other White House officials have spoken publicly since the bombings.