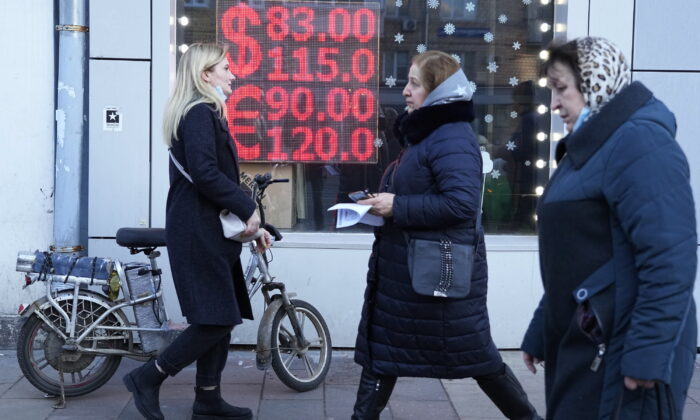 Is the US Dollar Under Attack?

Can the new China–Russia alliance destabilize the post-World War II order led by the United States?
By Emel Akan

Potential efforts to assist Russia to sell its oil and dodge Western sanctions have prompted fears about the survival of the global economic order. Some wonder if China and Russia’s continuous de-dollarization drive will expand, putting the U.S. dollar’s hegemony in the global financial system in jeopardy.

For over a decade, China and Russia have been trying to diversify away from the U.S. dollar mainly to shield their economies from Western sanctions and claim global economic leadership.

The U.S. dollar has been the world’s primary reserve currency since World War II. The greenback accounted for 59 percent of worldwide central bank foreign exchange reserves in 2021, followed by the euro (21 percent) and Japanese yen (6 percent). The U.S. dollar is also the most extensively used currency for international trade and investments.

China has a large amount of dollar reserves and doesn’t allow its currency, the yuan, to be freely traded on foreign exchange markets. This restricts the usage of the currency in cross-border transactions.

The yuan, also known as the renminbi (RMB), accounts for only 2.7 percent of global foreign exchange reserves.

While Beijing still relies substantially on the dollar, it has been trying to promote the yuan in its bilateral trade deals. China pushes for the usage of yuan in its Belt and Road Initiative (BRI), a massive trade and infrastructure project that seeks to revive the ancient Silk Road. Many BRI countries have already accepted the yuan as an official currency for trade with China.

Beijing also introduced yuan-priced oil contracts in 2018 to make it possible for crude exporting countries like Saudi Arabia to sell their oil in the Chinese currency.

But the U.S. dollar’s dominance in the oil market is holding firm. Close to 80 percent of global oil sales are still priced in dollars.

“China theoretically has the ability to snap its fingers tomorrow and provide a solid counterweight to the U.S. dollar,” according to Christopher Balding, an expert on the Chinese economy and the author of “Sovereign Wealth Funds: The New Intersection of Money and Politics.”

But Beijing won’t allow that, and the reason is very simple, Balding says.

Before the invasion of Ukraine, Moscow spent years attempting to shield itself from the effects of sanctions. After annexing Crimea in 2014, Russia dramatically curtailed its use of U.S. dollars. Its dollar reserves fell from almost 40 percent of the central bank’s stockpile in 2017 to 16 percent in 2021. The Russian government has sold off most of its U.S. Treasury assets and removed dollar assets from its sovereign wealth fund.

In the face of deteriorating relations with the West in recent years, Russia and China have strengthened their economic, political, and military ties.

In 2019, both countries inked a deal to broaden the use of the yuan and the ruble in their bilateral trade. The same year, Russia’s central bank increased the yuan’s share in its foreign exchange reserves to 15 percent from 5 percent.

According to Balding, China also appears to be preparing for the possibility of strong sanctions or being cut off from global markets, in the event of an invasion of Taiwan. For example, they have a couple of years’ worth of wheat on hand, Balding said. Beijing has also been trying to secure its energy supply for years. China struck a 30-year gas supply deal with Russia’s Gazprom earlier this year. It’s also trying to boost the production of coal domestically to cut the need for coal imports.

The Western sanctions on Russia are giving Beijing a unique opportunity to boost the yuan’s status in international markets. Chinese officials hope that working with Russia will help them build a yuan-based financial infrastructure, including its Cross-Border Interbank Payment System (CIPS), which is a rival of the globally used Society for Worldwide Interbank Financial Telecommunication (SWIFT), and a bank card payment system.

Russian crude is being sold at a significant discount to global benchmarks. And Chinese oil refiners are quietly snapping up cheap crude from Russia. Some Chinese buyers are even given the flexibility to pay in yuan, according to Bloomberg.

And it’s not just Russia that wants to embrace the yuan. Saudi Arabia, whose relationship with Washington has cooled after President Joe Biden took office, is reportedly considering accepting the yuan instead of dollars for oil sales to China. China, the world’s top crude importer, buys more than 25 percent of the oil that Saudi Arabia exports.

“It’s just another event or stress test that’s proving that globalization is over,” according to Michael O’Sullivan, author of the book “The Levelling: What’s Next After Globalization.”

People are getting excited about this because they perceive it as a moment when the West’s financial dominance may come to an end, which is unlikely to happen, O’Sullivan told The Epoch Times.

In worldwide trade, the U.S. dollar is by far the most widely used currency. From 1999 to 2019, the dollar accounted for 96 percent of trade invoicing in the Americas, 74 percent in Asia-Pacific, and 79 percent in the rest of the world, according to the Federal Reserve. The only exception is Europe, where the euro is the dominant currency.

“It’s very hard to see how the Chinese are really going to deepen the usage of their currency, particularly at a time when they’re alienating the Western world,” O’Sullivan said.

But the question, he says, is how far it can go.

The U.S. dollar is no longer what it was decades ago, Ezrati admitted, but it remains the best option and is unlikely to lose its status anytime soon.

Since the Bretton Woods Agreement in 1944, the greenback has been the world’s reserve currency. According to the International Monetary Fund, central banks’ holdings of U.S. dollar reserves have decreased to 59 percent in 2021 from 71 percent in 1999.

The Federal Reserve is facing the highest inflation in decades and must raise interest rates further to control it, according to Ezrati, since this is the only way to safeguard the U.S. dollar’s position.

“The only best protection, if you want to maintain your position as a premier currency, is to secure its value in real terms. And that means to fight inflation.”