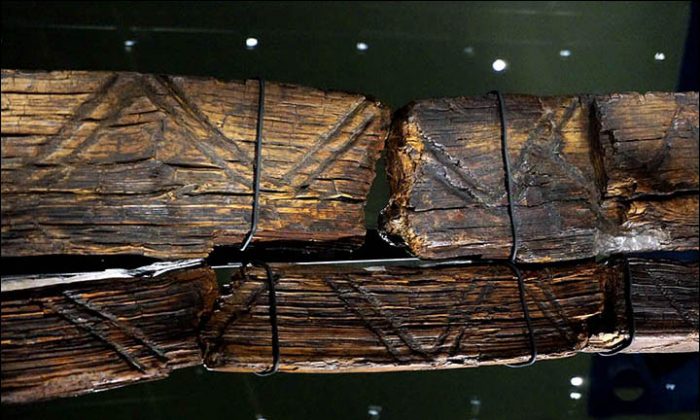 Is This the World’s Oldest Secret Code?

From The Siberian Times: Scientists are close to precise dating of the Shigir Idol, thought to be twice as ancient as the Egyptian Pyramids.

The Idol is the oldest wooden statue in the world, estimated as having been constructed approximately 9,500 years ago, and preserved as if in a time capsule in a peat bog on the western fringe of Siberia. Expert Svetlana Savchenko, chief keeper of Shigir Idol, believes that the structure’s faces carry encoded information from people living in the Mesolithic era of the Stone Age concerning their understanding of the creation of the world.

German scientists are now close to a precise dating—within five decades—of the remarkable artifact, which is a stunning example of ancient man’s creativity. The results are likely to be known in late February or early March.

Now, the question is reaching a better understanding among academics of the symbols and pictograms on this majestic larch Idol, one of Russia’s great treasures, which is now on display a special glass sarcophagus at its permanent home, Yekaterinburg History Museum, where Savchenko is a senior researcher.

German pre-historian Professor Thomas Terberger said: “There is no such ancient sculpture in the whole of Europe. Studying this Idol is a dream come true. We are expecting the first results of the test at the end of winter, (early) next year.”

Professor Mikhail Zhilin, leading researcher of the Russian Academy of Sciences’ Institute of Archeology, explained: “We study the Idol with a feeling of awe. This is a masterpiece, carrying gigantic emotional value and force. It is a unique sculpture, there is nothing else in the world like this.  It is very alive, and very complicated at the same time.

“The ornament is covered with nothing but encrypted information. People were passing on knowledge with the help of the Idol.”

He is adamant that we can draw conclusions about the sophistication of the people who created this masterpiece, probably scraping the larch with a stone “spoon,” even though the detail of the code remains an utter mystery to modern man.

Asked if they lived in permanent fear of mighty forces of mysterious nature, nervously casting around, petrified by danger, he replied: “Forget it. The men—or man—who created the Idol lived in total harmony with the world, had advanced intellectual development, and a complicated spiritual world.”

“It is obvious that the elements of geometrical ornament had some meaning,” stated Savchenko and Zhilin in explaining the Idol’s ancient markings.

“The difficulty of interpretation is the polysemy symbolism of these symbols”—in other words, the possible multiple related meanings. According to ethnography, a straight line could denote land, or horizon—the boundary between earth and sky, water and sky, or the borderline between the worlds.

“A wavy line or zigzag symbolized the watery element, snake, lizard, or determined a certain border. In addition, the zigzag signaled danger, like a pike. Cross, rhombus, square, circle depicted the fire or the sun, and so on.”

Savchenko and other museum staff have postulated that among its purposes was use as an early map, for navigation. Straight lines, wave lines, and arrows indicated ways of getting to the destination and the number of days for a journey, with waves meaning water ways, straight lines meaning ravines, and arrows meaning hills, according to this theory which has yet to be fully researched.

Author Petr Zolin, citing scientific work by Savchenko and Zhilin, stated: “The characters of the Idol cannot have an unambiguous interpretation. If these are images of spirits that inhabited the human world in ancient times, the vertical position of figures (one above the other) probably relate to their hierarchy.

“Placing images on the front and back planes of the Idol possibly indicates that they belong to different worlds. If there are depicted myths about the origin of humans and the world, the vertical arrangement of the images may reflect the sequence of events. Ornaments can be special signs which mark something as significant.”

The Idol reflects what these people looked like, with straight noses and high cheekbones.

The impression of the main three-dimensional face, with a gaping mouth, is of an Aztec look, but it is only because the part of the nose of the main face was broken. In all there are seven faces, six of which are two-dimensional.

“It is clear that the faces, together with the ornament, form separate figures,” wrote Savchenko and Zhilin. “On both the front and back of the Idol there are three figures. Here they are located one above the other, and the upper seventh figure … connects both sides and crowns the composition.”

Some have claimed the Idol includes primitive writing, which, if true, would be among the first examples of writing on Earth, but there is no consensus among experts who have studied the Urals statue.

The Idol was preserved by a stroke of luck concerning its resting place in the Urals.

It happened “thanks to a combination of antiseptics,” said Zhilin. “The idol was made from the Phytoncidic larch, then ‘canned’ in turf which is an acid anaerobic environment that kills microorganism-destroyers and also has a tanning effect.”

The scientists from the Lower Saxony State Office for Cultural Heritage are using accelerated mass spectrometry (AMS), enabling them to compare analyses of five microscopic samples of the larch from the idol with climate-change data for the past 10,000 years.

This will allow them to figure out when exactly the 159-year-old larch, from which the Idol is carved, grew.

The tests follow what Professor Terberger called “a very successful summer trip”  in which “we worked together with our Russian colleagues from the Yekaterinburg History Museum.”

The Idol was originally recovered in January 1890 near Kirovograd; it is some 2.8 meters (just over 9 feet) in height; it was protected throughout the millennia by a 4-meter (13-foot) layer of peat bog on the site of an open-air gold mine.

A lack of funding has, until now, prevented the proper testing of this Urals treasure to determine its age. Professor Uwe Hoysner, from the Berlin Archaeological Institute, said: “The Idol is carved from larch, which, as we see by the annual rings, was at least 159 years old. The samples we selected contain important information about the isotopes that correspond to the time when the tree grew.”

The samples used for testing were cut in 1997. The Idol was extracted in several parts from the peat bog.

Professor Dmitry I. Lobanov combined the main fragments to reconstitute the sculpture, but in 1914, the Siberian archaeologist Vladimir Tolmachev proposed a variant of this reconstruction by integrating previously unused fragments.

Tragically, some of these fragments were later lost, so only Tolmachev’s drawings of them remain.However, these suggest the original height of the statue was 5.3 meters (just over 17 feet). Some 1.93 meters (6 feet) of the statue did not survive the 20th century’s revolutions and wars and it is only visible in the drawings.

One intriguing question debated by Russian scientists is how the Idol—as tall as a two-storey house—was kept in a vertical position.

Museum staff believe it was never dug into the ground to help it stand upright, and that it was unlikely it was perched against a tree, because that would have covered more than half of its ornaments.