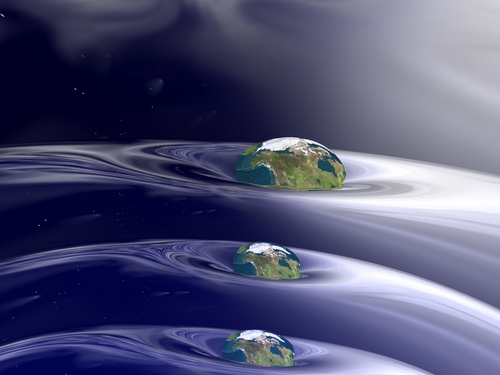 Is There More Than One Universe?

Either the universe is finite, or it is infinite. If it is infinite, says physicist Brian Greene, it means parallel universes most likely exist.

He used a metaphor in explaining the idea to NPR.

Picture the universe as a deck of cards.

Image of playing cards via Shutterstock

He said many theorists are taking the possibility of a multiverse seriously, approaching it from different angles. Here are a few of those angles:

Image of bubbles via Shutterstock

Our bubble stopped inflating, creating certain conditions here in our universe—but others continue to inflate and house physical properties quite different from those in the universe we observe, according to Vilenkin’s theory.

2. Our Universe Is a Hologram Projected From Another Universe

String theory views the universe as a world of very thin, vibrating strings. These strings create the pull currently understood as gravity. The world of strings is understood as a hologram projected from a lower-dimensional cosmos, one that is simpler, flatter, and without gravity.

FOR MORE, See Epoch Times article, Is the Universe a Hologram?

3. Huge Void in Space Could Be Link to Another Universe, Says Physicist

A void in space 1 billion light years across stumped scientists when it was discovered in 2007—then another void spanning 3.5 billion light years was discovered in 2009. These voids cannot be explained by the current understanding of the universe’s structure and evolution.Voids of this size could not have formed in the amount of time following the Big Bang, they would require much more time to form.

Laura Mersini-Houghton, theoretical physicist and associate professor at the University of North Carolina, told New Scientist: “It is the unmistakable imprint of another universe beyond the edge of our own.” She says quantum entanglement between our universe and another left a void as the universes separated.

FOR MORE, See Epoch Times article, Colossal ‘Hole’ in Space Could Be Link to Universe Beyond Our Own

4. Parallel Universes That Could Bang Into Each Other

The Big Bang currently theorized to be the origin of the universe, may have been caused by two three-dimensional universes colliding in another dimensional space. The Big Bang may have been one of multiple Big Bangs—the creation of the universe may be cyclical—according to Paul Steinhardt, professor of physics at Princeton University, and Neil Turok, director of the Perimeter Institute in Ontario, Canada.

Their theory is partially based on superstring theory. They are quoted in the description of their book, “Endless Universe Beyond the Big Bang”: “[We] contend that what we think of as the moment of creation was simply part of an infinite cycle of titanic collisions between our universe and a parallel world.”

MORE: How Big is the Universe? How Small Are We in It?