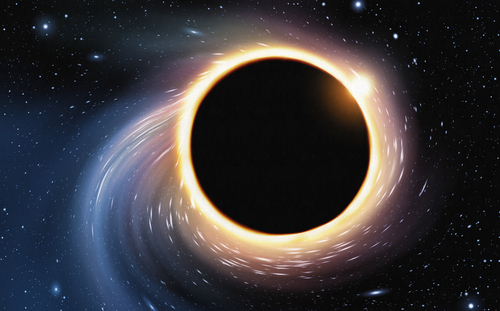 An illustration of a black hole. Japanese researchers calculated the internal energy of a black hole and that of a theoretical lower-dimensional cosmos. The similarities provide evidence to support the theory that the universe is a hologram. (Shutterstock*)
Science

Is the Universe a Hologram?

Researchers in Japan have taken another step toward supporting the theory that our universe is a hologram.

Yoshifumi Hyakutake of Ibaraki University in Japan and his colleagues have mathematically shown it is possible the universe we know is actually a projection from a lower-dimensional universe, reported the journal Nature on Wednesday.

Describing the theory in simple terms by relating it to the hologram on a credit card, professor of mathematical physics at the University of Southampton Kostas Skenderis once stated on the university website: “The idea is similar to that of ordinary holograms where a three-dimensional image is encoded in a two-dimensional surface, such as in the hologram on a credit card, but now it is the entire universe that is encoded in such a fashion.”

Here’s a look at how the hologram theory works and how the Japanese researchers’ work supports it:

Basics of the theory

In 1997 theoretical physicist Juan Maldacena, who is now at the Institute for Advanced Study in Princeton, N.J., showed that the hologram theory could work with conventional physics.

His theory views the universe as a world of very thin, vibrating strings. These strings create gravity. The world of strings is a hologram projected from a lower-dimensional cosmos, one that is simpler, flatter, and without gravity.

This theory has been seen in the scientific community as credible ever since, according to the journal Nature, though it has not been definitively proven.

How the Japanese Findings Support It

The two match. The correlation is a mathematical, theoretical step toward showing that there could really be a a lower-dimensional cosmos that is projected into other, related cosmoses.

Stanford University theoretical physicist Leonard Susskind told Nature: “They have numerically confirmed, perhaps for the first time, something we were fairly sure had to be true, but was still a conjecture—namely that the thermodynamics of certain black holes can be reproduced from a lower-dimensional universe.”

Maldacena told Nature Hyakutake’s findings, along with previous papers by his Japanese team, test “the dual [nature of the universes] in regimes where there are no analytic tests.”

Though neither of the models explored by the calculations resembles our universe, Maldacena explained, the similarities shown between the two give hope of a proof that our universe may similarly be related to a lower-dimensional universe.

The Guardian Express quotes Slate reporter and scientist Matthew R. Francis, “[Hyakutake’s simulations and the theory formulated do not] constitute a mathematical proof that these two systems are equivalent, and (don’t) demonstrate that similar methods can work for our real universe, but it’s a step further along in showing that the holographic principle could be fruitful in understanding the cosmos.”

A previous version of this article stated that Juan Maldacena was the first to propose that the universe is a hologram. Maldacena instead showed how it could be viewed through the lens of conventional physics. Epoch Times regrets the error.

*Image of a black hole via Shutterstock