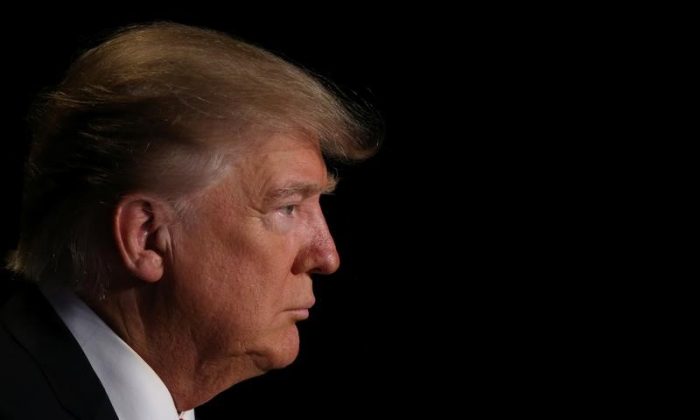 Is the Sky Blue? Depends on What Donald Trump Says

NEW YORK/WASHINGTON—Republicans generally agree that politicians should not enrich themselves while running the country. Yet most think it is okay for President Donald Trump to do so.

Democrats largely support the idea of government-run healthcare. But their support plummets when they learn that Trump once backed the idea.

At a time of already deep fissures among American voters on political, cultural and economic issues, Trump further polarizes the public as soon as he wades into the debate, according to the results of a Reuters/Ipsos poll. The poll suggests any effort to reach a consensus on key policy issues could be complicated simply by Trump’s involvement.

The survey from Feb. 1 to March 15 of nearly 14,000 people asked respondents to consider a series of statements Trump has made on taxes, crime and the news media, among other issues. In many cases, the data showed that people will orient their opinions according to what they think of Trump.

Republicans, for example, were more likely to criticize American exceptionalism – the notion that the United States holds a unique place in history—when told that Trump once said it was insulting to other countries. They were more likely to agree that the country should install more nuclear weapons, and they were more supportive of government spending for infrastructure, when they knew that Trump felt the same way.

Democrats moved in the opposite direction. They were less supportive of infrastructure spending, less critical of the judiciary and less likely to agree that urban crime was on the rise when they knew that those concerns were shared by Trump.

For a graphic on the poll results, see http://tmsnrt.rs/2o5nbfF

“I’m basically in disagreement with everything he says,” said Howard House, 58, a Democrat from Jacksonville, Florida, who took the poll. “I’ve almost closed my mind to the guy.”

Trump is not the first president to polarize the public. A 1995 poll by the Washington Post found that Democrats appeared to favor legislative action when they thought it was then-President Bill Clinton’s idea, and a 2013 survey by Hart Research Associates showed that both positive and negative attitudes about the 2010 Affordable Care Act intensified when called by its other name, Obamacare.

But previous presidents were more popular than Trump at this point, according to the Gallup polling service, and they may have been better positioned to address the public divide because of it. Gallup had Trump at a 42 percent approval rating on Tuesday. He was as low as 35 percent last week.

That leaves Trump facing a largely disapproving electorate, even as the White House signals that in the coming months it wants to pass a sweeping tax-reform package, a large infrastructure plan, and perhaps try again to supplant the Affordable Care Act.

The White House said that Trump has tried to reach out to those who did not support him during the campaign in an attempt to build political consensus.

“The door to the White House has been open to a variety of people who are willing to come to the table and have honest discussions with the President about the ways we can make our country better,” a White House spokeswoman wrote in an email.

The Hyper Partisan Era of Trump

Poll respondents were split into two groups. Each received nearly identical questions about statements Trump has made in recent years. One group, however, was not told the statements came from Trump.

The poll then asked if people agreed or disagreed with those statements. In a few cases, Trump made little to no impact on the answers. But most of the time the inclusion of his name changed the results.

A series of questions about conflicts of interest produced the biggest swings.

Some 33 percent of Republicans said it was okay if “an official” financially benefits from a government position. However, when a separate group was asked the same question with Trump’s name added in, more than twice as many Republicans—70 percent—said it was okay.

When interviewed afterward, some respondents said they knew they were making special exceptions for Trump.

Susie Stewart, a 73-year-old healthcare worker from Fort Worth, Texas, said it came down to trust. While most politicians should be forbidden from mixing their personal fortunes with government business, Stewart, who voted for Trump, said the president had earned the right to do so.

“He is a very intelligent man,” Stewart said. “He’s proved himself to be one hell of a manager. A builder. I think he has the business sense to do what’s best for the country.”

On the other side of the political spectrum, House, the Democrat from Florida and a Hillary Clinton supporter, said he also made an exception for Trump. But in this instance it meant that House disagreed with everything Trump supported.

If Trump said the sky was blue, “I’m going to go outside and check,” he said.

It is impossible to say exactly what motivates people to answer a certain way in a political poll, said John Bullock, an expert in partisanship at the University of Texas at Austin.

Some respondents may have looked past the question and answered in a way that they thought would support or oppose Trump, Bullock said. But he said it was also likely that others simply have not thought deeply about the issue and are looking to Trump as a guide for how to answer.

“They think of him either as a man who shares their values or someone who manifestly does not,” Bullock said.