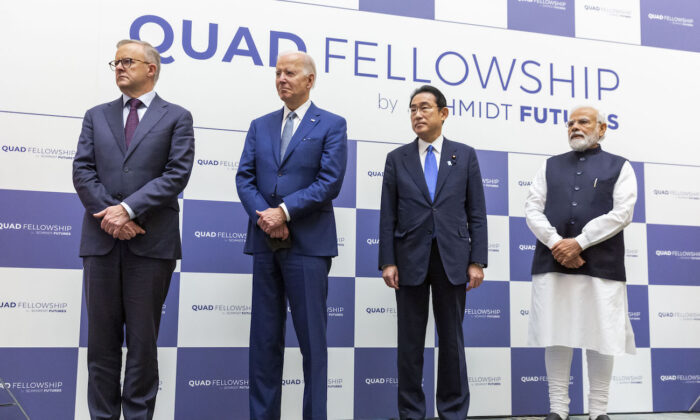 Is the Quad a Military Alliance? Should It Be?

The Quad is the Quadrilateral Security Dialog between the United States, Australia, Japan, and India. The group has been denounced by Beijing as “a sinister gang” and an incipient Asian NATO. The latter term has often been applied to it in the media. Is the Quad a military alliance in the making? Should it be?

Purpose of the Quad

The idea of organizing the Quadrilateral Security Dialog is credited largely to former Japanese Prime Minister Shinzo Abe. In 2007 he proposed a coalition of Indo-Pacific democracies to work together to guarantee a “free and open Indo-Pacific” region.

That cooperation was in part an outgrowth of Exercise Malabar; a joint U.S.-Indian naval exercise that began in 1992. The United States suspended the exercise in 1998, in response to India’s nuclear weapons testing, but renewed the collaboration following the attack on the World Trade Center on September 11, 2001.

The dialog was given further impetus by the maritime cooperation between India and the United States in the wake of the December 26, 2004, Indian Ocean tsunami. Additionally, both the Japanese and Australian navies participated in those humanitarian relief efforts.

The group met formally for the first time on the sidelines of the 2007 Association of Southeast Asian Nations (ASEAN) annual meeting. That organization consists of 10 Southeast Asian countries.

The Quad was largely inactive during the two terms of the Obama administration but was revitalized and prioritized by the Trump administration.

Japan and Australia joined the Malabar Exercise from 2007 on, although their participation was intermittent. Since 2020, however, all four countries have participated in each exercise. Additionally, under the Trump administration, the exercise was expanded to include big deck carriers. New exercises are planned for 2022.

Australia suspended its participation on the Quadrilateral Security Dialog in 2008, at the behest of Australian Prime Minister Kevin Rudd, as part of a broader policy seeking to foster closer relations with China. However, in 2010, Australia rejoined the Quad. It also renewed its participation in the yearly Malabar Exercise.

In 2012, Abe proposed the idea of an Asian “Democratic Security Diamond” consisting of Japan, the United States, India, and Australia. This proposal led to renewed talks among the four nations in Manila ahead of the 2017 ASEAN summit.

At both the 2021 and 2022 Quad summits, the group announced the formation of six working groups focused on: COVID-19 Response and Global Health Security, Climate, Critical and Emerging Technologies, Cyber, Space, and Infrastructure.

The importance of infrastructure development was underscored by a pledge from the four countries to make $50 billion available for infrastructure investment in the Indo-Pacific region.

The group also endorsed Japan’s Expanded Partnerships for Quality Infrastructure and the Blue Dot Network process that was initiated by the Trump administration. Both initiatives are designed to create a certification and evaluation framework for investments in sustainable development projects in the region.

At the Tokyo Summit, the group also announced the creation of the Indo-Pacific Partnership for Maritime Domain Awareness (IPMDA). Working with regional partners, IPMDA “will offer a near-real-time, integrated and cost-effective maritime domain awareness picture,” according to a White House fact sheet.

The intent of IPMDA is to allow “partners in the Pacific Islands, Southeast Asia, and the Indian Ocean region to fully monitor the waters on their shores and, in turn, to uphold a free and open Indo-Pacific.”

The Quad Is Not a Military Alliance

The joint naval exercises held under the Quad’s auspices are designed to foster increasing interoperability between each country’s naval forces and do have significant military value. The four countries, however, do not have a collective security agreement between them where they are pledged to come to a common defense should any of the four be attacked.

While not a military agreement per se, the motivation for the Quad was to respond to Beijing’s increasingly assertive behavior in the Indo-Pacific region. That region’s strategic importance is underscored by the fact that 42 percent of the world’s exports and 38 percent of global imports transit the Indo-Pacific.

China’s aggressive behavior has manifested itself on multiple planes. These include a subversion of democratic values, particularly as evidenced by its repression of pro-democracy advocates in Hong Kong, and its persecution of the minority Uighur inhabitants in Xinjiang.

In addition, Beijing’s claims to a wide, sweeping sovereignty over the South and East China Seas, its assertion of ownership over the Senkaku islands, which are currently administered by Japan, its repeated provocation of the Republic of China’s airspace, repeated border skirmishes with India, as well as incursions in the Philippines’s territorial waters, and its aggressive construction and militarization of nine artificial islands covering approximately 3,200 acres in the South and East China Sea, have all underscored China’s increasingly belligerent foreign policy.

The Quad’s agenda, however, goes beyond the immediate military threats posed by China. The group also wants to challenge China’s soft power and its ability to leverage that influence to promote its agenda.

Beijing presents a wide-ranging economic and technological challenge to the United States and its allies that goes beyond its military objectives. China is a central element in many global supply chains and has been willing to use that leverage in pursuing its political agenda.

China has also, through its Belt and Road infrastructure development initiative, emerged as a major source of development capital. Often, the terms surrounding those investments can prove highly destabilizing to the host countries. The recent economic and political meltdown in Sri Lanka being a case in point.

Moreover, in tandem with its “String of Pearls” program to acquire critical maritime infrastructure assets that potentially have dual civilian and military application, the Belt and Road program is facilitating a significant expansion of China’s maritime power.

China is also a rising technological powerhouse, especially in the areas of telecommunications and biotechnology, although some of its progress has been exaggerated. Beijing has sought to use Huawei’s position in advanced 5G telecommunications infrastructure, for example, to advance its diplomatic goals.

Likewise, it has used China’s position as a major vaccine supplier to curry diplomatic influence, especially in Africa and the Pacific region. Ninety countries have relied on China’s Sinovac vaccine in combatting the COVID pandemic, although often with mixed results.

The six working groups that were discussed at the 2022 summit are all focused on those sectors where Beijing is trying to leverage its soft power to maximum advantage.

Should the Quad Be a Military Alliance?

As noted previously, the Quad is not a military alliance because it lacks any mechanism for collective defense. Moreover, India has made it clear that it wishes to maintain its “strategic autonomy” and a greater flexibility in its foreign policy.

New Delhi, for example, has been noticeable in its unwillingness to condemn the Russian invasion of Ukraine and has remained an eager buyer of Russian petroleum, notwithstanding the sanctions that have been placed on Moscow by the United States and the EU.

The agreement enables Australia to acquire eight new nuclear-powered submarines and provide it with sensitive nuclear propulsion technology that hitherto the United States has only shared with the UK military. Moreover, the agreement also calls for cooperation in a wide array of military domains, including cyber warfare, hypersonic and counter-hypersonic technology, and electronic warfare.

The aim of AUKUS is not only to modernize and expand Australia’s maritime forces, especially its undersea capabilities, but also to improve joint capabilities and interoperability. The agreement does not have any mutual defense provisions, but these are already in place from prior security agreements between the United States, the UK, and Australia.

It’s possible that AUKUS could develop into a broader military alliance that would include countries that have already signed security treaties with the United States. In that sense, their participation would not necessarily be a formal entry into a new alliance, but a way of enhancing the military capabilities and interoperability of America’s security partners in the region.

AUKUS and the Quad should be seen not as disparate initiatives but part and parcel of a broader effort to address Beijing’s rising belligerence in the Indo-Pacific region.

Even without a formal military alliance AUKUS, and its potential expansion, can form the core of a stronger military presence held together by each country’s bilateral security ties to the United States. Such a structure would also allow for the modernization and expansion of each member’s military forces without requiring an expansion of the U.S. military presence in the region.

The Quad can be an effective instrument for addressing China’s soft power and Beijing’s efforts to leverage that influence to achieve its political, diplomatic, and strategic goals in the region. By eschewing a formal military alliance, the Quad will also function to draw India closer to the other members, while at the same time offer other potential members a way of joining the Quad that falls short of a formal military alliance.

What has been missing in this two-pronged approach to dealing with Beijing is a third element, a regional economic framework to spur investment and trade. The United States has just announced an Indo-Pacific Economic Framework (IPEF) with Australia, Japan, and India. Also included are the Republic of Korea, Vietnam, Indonesia, Thailand, Brunei, the Philippines, New Zealand, Singapore, and Malaysia.

The scope of this initiative has not been well defined by the Biden administration other than to note that it has four pillars: digital trade and trade facilitation, clean energy and decarbonization, supply chain resilience, and anti-corruption and taxes.

Still, any partnership that expands and strengthens United States economic leadership in the Indo-Pacific region is a critical element in addressing China’s economic soft power.

The Quad, combined with AUKUS, the IPEF, and the continued U.S. military presence in the Indo-Pacific region, are all interrelated elements of how the United States hopes to respond to Beijing’s increasingly aggressive ambitions in the region.