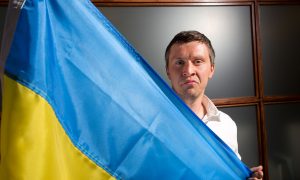 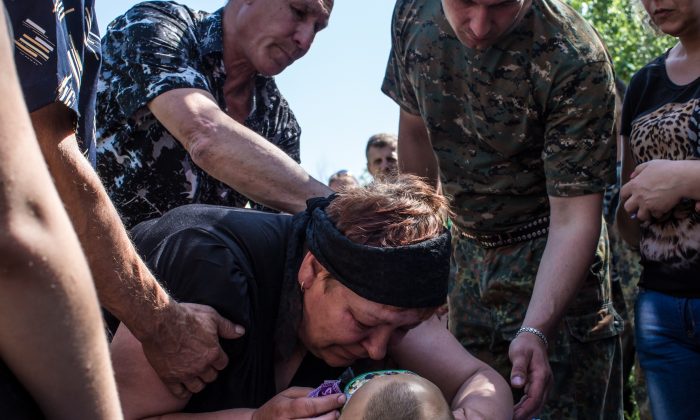 Relatives grieve over the body of Aleksandr Politov, a pro-Russia militia fighter who was killed when his group attacked a Ukrainian military checkpoint two days earlier in the village of Blahodatne, on May 24, 2014 in Horlivka, Ukraine. (Brendan Hoffman/Getty Images)
Crisis in Ukraine

Is the European Union to Die For?

On the outskirts of Europe people are literally dying to get in, while the core members of the EU are having second thoughts.

Nathan Hale spied on the British in 1776 and was hanged because of it. Before he mounted the scaffold, he reportedly uttered the famous phrase, “I only regret that I have but one life to lose for my country.”

His country, the 13 former British colonies that formed a tenuously United States, had been conjured into existence only a few months earlier by the Declaration of Independence on July 4. If Hale hadn’t said precisely those words—or if he’d been quoting the British playwright Joseph Addison—it didn’t really matter. The new United States needed just such dying words to consecrate the nation.

After all, countries exist because people are willing to die for them. It is the unusual quality of nations, shared only by families and tribes, to command such loyalty. The same can’t be said of other entities like villages or businesses or trade pacts or continents. It’s just not likely that anyone would go out and die for Skokie or NAFTA.

Until recently it seemed as if the European Union fell into this latter category as well. For most of its existence, the EU has been the antithesis of individual sacrifice on behalf of the nation. The creation of the European Community was specifically meant to put to bed the national passions that gave rise to two world wars in the 20th century and resulted in the loss of tens of millions of lives. The further integration associated with the European Union was a compromise designed in part to place a reunified Germany—a national development that the French and British, among others, found potentially threatening—in an economic and political straightjacket. When Francis Fukuyama in The End of History wanted to find something that represented the exact opposite of thymos—individual recognition and heroism—he chose Brussels and the European bureaucracy.

And yet it seems that people are still willing to die for Europe. Consider the case of Ukraine. “More than 100 protesters died in Kiev under the blue and yellow banner of the European Union when they took to the streets to demand that Yanukovych reconsider his last-minute decision—made under heavy Russian pressure—to reject” a trade agreement with the EU,according toThe Washington Post.

Last week, the Ukrainian government fulfilled this key demand of the Euromaidan movement. Ukraine has taken a step westward, and those who died in February demonstrations may well become the first martyrs to integration.

This willingness to die for the EU is particularly striking since “Europe” is decidedly a mixed bag for Ukraine. Just as it did for the former Soviet bloc after the revolutions of 1989, “Europe” has certainly occupied a lofty place in the popular imagination of Ukrainians. In the early 1990s, Poles and Czechs and Bulgarians believed that they would soon be living like Austrians or Danes. Europe, for them, meant high per capita GDP, strong social safety nets, the rule of law, freedom of movement, and all the other elements of the EU swag bag.

But whatever the new entrants from the east to the European Union managed to achieve over the last decade, it has come at considerable costs—all of which should now be visible for Ukrainians. But as the old song lyric goes, Ukrainians have been down so long, it all looks up to them.

The recently concluded trade pact may well represent the first step on the long road to Europe. But in the short term, it will cause some significant pain for Ukraine. First will come the loss of Russian markets and rising energy prices. Then, as Kiev lowers its tariff walls to the west, European products and businesses will overwhelm the country like a tidal wave, wiping out any local enterprises that can’t compete (i.e., most Ukrainian businesses).

The real challenge is that the EU deal comes on the heels of another agreement—with the IMF. The austerity conditions imposed by the IMF will make it even more difficult for the government to alleviate the dislocation caused by closer integration with Europe. In exchange for $14-18 billion in loans, Ukraine will have to cut its fiscal deficit from 4.5 percent (2013) to 2.5 percent (2016). Prime Minister Arseniy Yatsenyuk expects the Ukrainian GDP to shrink 3 percent over the next year. That might be overly optimistic. By the end of 1991, with its own austerity measures in place, Poland’s GDP had fallen 20 percent lower than 1989.

Membership in the EU means more than just large-scale economic dislocation. In May, Ukraine moved one step closer to visa liberalization, which opens up a whole new world for Ukrainians. Much further down the line, stabilization funds would be available to upgrade Ukraine’s infrastructure. But this is certainly a long-term scenario. Ukraine has half the GDP per capita of the EU’s lowest performer, Bulgaria. It has a serious territorial conflict with Russia (over Crimea) and among its own citizens (in eastern Ukraine). Turkey concluded its association agreement with the European Community more than 50 years ago and submitted its application for full membership more than 25 years ago. It’s still waiting. Ukraine may be standing at the altar for a similar length of time.

After all, the civil war taking place in eastern Ukraine may not end any time soon. The most recent ceasefire has broken down, and fighting has resumed in Slovyansk and Donetsk. Positions are hardening. Ukrainian President Petro Poroshenko was reportedly under significant political pressure to stop negotiating with Russian President Vladimir Putin. And Putin continues to threaten to escalate to protect Russian speakers abroad. The rebels in the eastern Ukrainian provinces, some of whom are actually Russian citizens or mercenaries, have not clearly identified what they want—more autonomy, outright independence, or absorption by Russia. But they know what they don’t want: rule by Kiev. Nor are they persuaded by the prospect of closer ties to Europe. They are, to paraphrase the old saw about Mexico and the United States, so close to Russia and so far from God.

Ukraine has suffered enormously over the centuries because of its indeterminate position between east and west. In the middle of the 20th century it was put on the rack of history, pulled eastward by Stalin and westward by Hitler. Putin is no Stalin and Merkel is no Hitler, but the current dynamic has some unpleasant historical resonances. When Ukraine joined the Eastern Partnership six years ago, it no doubt imagined that it had found an elegant solution to its perennial dilemma. It aspired to have the best of both worlds—Russian markets to the east and European investment from the west. Up through 2013, itenjoyed the closest trade and economic cooperation with the EU of the Eastern Partnership countries even as Russia remained its largest trade partner. Now it’s looking at potentially the worst of both worlds.

Ukrainians are not the only ones who are dying to get into Europe. Of the million or so new immigrants to Europe every year, approximately 100,000 try to get in illegally over land or by sea. Over the last two decades, as many as 20,000 people have died in their attempts to slip into Europe from the south, including over 1,500 people in 2011 at the time of the Arab Spring. Compare that with the deaths at the U.S.-Mexico border, which number in the low hundreds annually.

Right now, Europe is not exactly throwing open its doors to new member states or to huge numbers of immigrants. Anti-immigrant politicians are doing well at the polls. Support for further enlargement of the EU has dropped since the financial crisis. Many Europeans believe that they won’t be able to maintain their high standard of living if their social welfare states cover a major influx of immigrants or subsidize the economic upgrade of new members. It’s not exactly Fortress Europe. But it’s certainly not come-one-come-all Europe.

Meanwhile, Euroskepticism is on the rise, with the United Kingdom set to hold a referendum on membership in 2017 and other countries reconsidering their relationship with the EU. “What is so striking is that everyone in the EU has been losing faith in the project: both creditors and debtors, and eurozone countries, would-be members, and ‘opt-outs,'” write Jose Ignacio Torreblanca and Mark Leonard for the European Council on Foreign Relations. “Back in 2007, people thought that the UK, which scored -13 percent in trust, was the Eurosceptic outlier. Now, remarkably, the four largest eurozone countries have even lower levels of trust in the EU institutions than Britain did back in 2007.”

It’s a striking contrast. On the outskirts of Europe people are dying to get in, while the core members of the EU are having second thoughts. That’s how exclusive clubs work. The members complain about rising dues and the state of the facility; non-members imagine a paradise inside where they can’t go. For some years now, Europe has come to represent for its members nothing but austerity and bureaucracy. Would-be member-states and would-be citizens, however, still perceive the many advantages of joining. For the EU club to survive, Brussels will have to figure out how to make membership as vital to those on the inside as it obviously is for those on the outside looking in.

Republished with permission from Foreign Policy in Focus. Read the original.