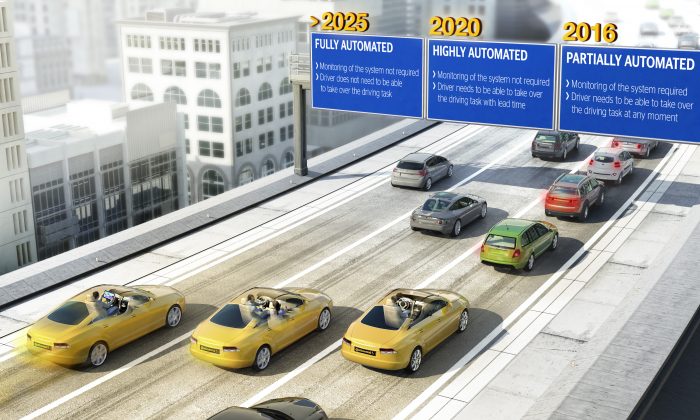 If you have not purchased a new car recently, talk about self-driving cars can sound like science fiction, even though much of the technology is already on the road.

Safety features like side view assist, which blinks a warning light in your side mirror if a car is in your blind spot; forward collision warning, which automatically applies your brakes if a crash is imminent; and adaptive cruise control, are part of the foundation of how self-driving cars will work.

These driver assist or semi-autonomous driving features require the driver be in control or prepared to take control should the technology fail.

Fully autonomous cars for the mass market are not expected until at least 2020 and will connect current features to a central intelligent software that is compliant with appropriate regulatory and legal frameworks.

In the meantime, the technology is being rolled out in stages, as safety features allow drivers to get used to a different way of driving.

One step is learning to trust the car’s “eyes” (displayed on a screen) to see details behind the car, but still turning to look for possible pedestrians.

Another is using the auto parallel park feature that beeps when you pass a spot large enough for your car while trawling the street. The car tells you, “Engage auto park. Be prepared to take the wheel,” and you wait as the car backs up and angles it into the spot.

The Promise of Safety

Visionaries expect the day will come when our cars will be more attentive—and less accident prone—than we are.

Computers do not drink, as advocates note, while more than half of the 30,000 fatal crashes in the United States in 2014 involved alcohol, according to data compiled by the Insurance Institute for Highway Safety (IIHS).

Not paying attention, by texting while driving, for example, is another major cause of accidents that computers would resolve.

“Our industry can reduce these [accident] numbers significantly. And if we can, then we must,” Cadillac President Johan de Nysschen said in a speech at the 2015 J.D. Power Automotive Marketing Roundtable.

Russ Rader, senior vice president of communications for IIHS, said some of the “building block systems” are reducing crashes.

Based on data on police-reported crashes in 22 states between 2010 and 2014, IIHS found front crash prevention alerts reduced crashes by 27 percent and automatic braking reduced crashes by 50 percent. Rader says analysis of the data for other features was still inconclusive.

Traditionally, IIHS would conduct safety tests on features like headlights and airbags, but this year it began also testing driver-assisted safety technologies.

Testers confirmed anecdotes shared by drivers on social media about having to take control of the vehicle to avoid an unsafe situation.

Rader said consumers need help understanding how the systems work—and what they don’t do.

The tendency of some consumers to want to disengage from the road too soon presents a challenge.

Drivers get annoyed when a feature doesn’t work as advertised and might not use it as a result.

Rader suspects annoyance is largely why, according to a survey by IIHS, 67 percent of drivers who had their cars serviced at a Honda dealer had turned off their lane departure warning system, while all but one in 184 vehicles had kept the forward collision warning on.

A Desire to Disengage

Consumers appear ready to embrace self-driving technologies. The idea that we might finally be able to read or watch a documentary while driving is alluring for most people, according to market research by KPMG.

One challenge is the tendency of some drivers to disengage from the road too soon. Manufacturers are now grappling with how to ensure drivers keep their hands on the wheel when necessary, said Rader.

The first hands-free driving fatality occurred in June when a driver using Tesla’s Autopilot feature, while reportedly watching a Harry Potter film, crashed into the underside of a tractor trailer.

“Neither Autopilot nor the driver noticed the white side of the tractor trailer against a brightly lit sky, so the brake was not applied,” Tesla wrote in a statement after the accident.

“As more real-world miles accumulate and the software logic accounts for increasingly rare events, the probability of injury will keep decreasing,” stated Tesla.

In September, Tesla announced an upgrade to its market-leading semi-autonomous driving system. CEO Elon Musk told reporters the upgrade would have prevented the crash.